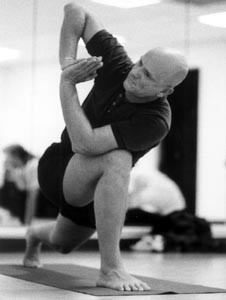 Muscle in on a multitude of new exercise options

WITH CHRISTMAS stockings, turkeys, and bellies all suitably stuffed for another year, the next round in the annual ritual is here. Overindulgers everywhere are resolving to coax themselves off the couch. “Shed flab, get fit, feel fantastic” is again the mantra of the moment. The road from pig-out to workout may well be paved with sweat, tears, and garaged treadmills, but there are plenty of fitness alternatives out there.

Here are a few local favorites:

IN THE ’80S, Jane Fonda embodied the ideal when she pulled on her shiny turquoise leotard and urged us to “feel the burn!” These days, multimedia icon Madonna has become the latest exercise “expert” by applying a Vaishnava tilak (sacred Hindu facial marking), donning a sari at the MTV Awards, and touting the Eastern mysticism of Ashtanga power yoga. People are listening.

These days, the studio at Santa Rosa’s Airport Health Club is humming with rigorous activity. But it’s not weightlifting that has the participants grunting and breathless like barefoot Charles Atlases–it’s yoga. If you’ve pegged this exercise as placid and low-key (and perfect for a lazybones like you), think again. Instructor Alexei Brown is working the heck out this group of eager students with his strenuous blend of Hatha and Ashtanga yogas.

“It’s not supposed to be a cakewalk,” says Brown. “I don’t try to tone down the class. If it’s not a challenge, it’s boring.”

He leads the students through a succession of increasingly demanding poses and demands that they hold their contortions for several punitive moments. During these power yoga workouts, the dimly lit studio is silent except for soft recorded music, a few creaking joints and quiet groans, and one woman who hisses “Jee-sus!” to herself whenever the going gets too tough.

According to Brown, yoga will improve flexibility, strength, stamina, and balance, and will keep the spine flexible. “Yoga keeps your mind calm and focused when everything around you may be wavering,” he says.

“It’s the greatest gift I’ve found for myself so far.”

Several local health clubs have added yoga classes because of Madonna’s flirtation with the discipline, and there are classes offered at community centers and elsewhere. Shop around. For details on the Airport Club’s classes, call 528-2582.

“MY WORKOUT can be so hard you’re puking,” says Renee Scott, a trim, muscular woman with a blond ponytail and clad in army fatigues, black sports bra, biker jacket, and combat boots as she lugs gym equipment at Body Central Fitness Club for Women. Scott is preparing for her first GI Jane workout, a basic training-type class at the club. Part tough-cookie, part comedienne (she plans to play Loony Toons music during the workout), Scott, who has spent several years in the Navy and the U.S. Coast Guard, looks amused as word of her upcoming military moves begin freaking out some of the health club regulars.

“I decided not to do [the GI Jane workout]. It looks too tough,” confides one woman. But, military-style workouts that promise peak physical condition are all the rage. “These workouts remind me of high school PE classes,” says Kim Ryan, general manager at the Park Point Health Club, which offers similar classes, called Boot Camp, for men and women (patrons there can get sissy cards that waive any exercises deemed too tough). “There’s drilling, chanting, and marching to army music. People love it because they’re motivated by the instructor, and there’s teamwork and camaraderie.”

“Military workouts are simple on the mind,” says Scott. “And really good if someone’s been working all day.”

Scott’s workout (taught at Body Central for women and Stan Bennett’s Health and Fitness in Rohnert Park for men and women), which incorporates calisthenics, push-ups, jumping jacks, weight lifting, and Tae Bo-type moves, burns more calories in 45 minutes than a step class does in an hour. “You’re gonna be tired when you leave, but not so that you can’t drive home,” she says.

OVER AT Montecito Heights Health and Racquet Club, 10 people are clinging to stationary bicycles, their toned legs whirring like frantic egg beaters. They’re Spinning, which is one of the hottest and most strenuous new fitness crazes. “Spinning has been big for the last couple of years,” says A. J. Maldonano, fitness director and Spinning instructor at Montecito Heights. “But now it’s going gangbusters.”

Geared particularly for those in pretty good shape, the Spinning workout is a high-intensity, group, indoor-cycling session on a set of modified stationary bicycles that allow the riders to control pedaling resistance. But unlike the bikes in the old days of individual riding, these are fanned out in a semi-circle around the instructor, who can monitor each rider on a control panel and offer, well, encouragement to those that lag behind.

So don’t expect to sit placidly and catch up on your reading or watch your favorite TV cooking show–this is a real workout.

“It’s a group situation with an instructor or leader who takes you through valleys and hills and puts on resistance as if you’re going up regular hills,” explains Maldonano.

A Spinning session burns between 500 and 800 calories an hour. “I’ve heard that it’s like cramming a grueling three-hour “Tour de France” ride into a 45-minute workout,” pants a sweaty Spinner named Jeff.

Spinning not only works legs, buttocks, and heart, but enthusiasts say it tones all the muscles, including arms, stomach, and chest. Plus, one experiences an endorphin-infused sense of serenity when it’s over!

Many health clubs offer Spinning classes, so call around. For more info about classes at Montecito Heights Health and Racquet Club, call 526-0529.

Put a bounce in your step: KanGoo Jumps are portable trampolines.

“AHHWWOOOO!,” yowls Daniel Taylor, startling a woman with two tykes in tow in the middle of Santa Rosa Plaza Mall with his ear-piercing werewolf impersonation. “Whatcha all doing walking the old-fashioned way?” he demands. The wary woman ushers the kids forward and rapidly scurries on, trying to ignore the bearded man in bouncy boots who’s goading them all to try his strange footgear. Taylor, unperturbed, bounces after them in his KanGoo Jumps. “C’mon, let’s jump!” he enthuses, then shrugs good-naturedly as they duck into a store. He begins scanning the concourse for the next approaching victim.

“Once the endorphins kick in, I get downright goofy here,” he confides. “This releases the inner child.”

The shiny plastic boots with springs attached may look dangerous as hell, but Taylor says they’re actually very stable, once you get used to them.

The manufacturer claims that KanGoo Jumps reduce the impact shock to joints and that bouncing in them burns calories and tones the body. “I used to weigh 260 pounds and could hardly pull my ass off the chair,” confides Taylor with a grin.

On the feet, the jump boots are strange, indeed, and not entirely easy to get used to. Still, the biggest attraction of this new health toy has to be one’s newfound ability to ricochet around town like a demented springbok. “Most people quit their exercise routine because it’s not fun, it hurts, or it’s boring,” explains Taylor. “This really is fun, it gets your endorphins crankin’–and it finally gets you moving again.”

LEILANI MARINO exudes a warmth she describes as “Aloha Spirit.” With her quick smile and sincere greeting, you almost expect Marino, who is a nurse and Hawaiian dance teacher, to place a lei around your neck at the first meeting. The sign outside her Santa Rosa studio reads: “Hulacize. No dancing experience necessary, only enthusiasm, positive attitude, and a working body.”

If the prospect of wiping down the sticky equipment in a sweaty gym gives you the heebie-jeebies, the gentle art of hula may be just the answer.

Not that the island dance form is as easy as it looks, mind you.

“People think [hula] is really simple, that you just get out there and wiggle your hips,” says Marino. “But it takes a lot of leg-muscle control, strong arms, upper body strength, and coordination. It’s not quite as simple as it seems.”

Marino coined the term “hulacize” to appeal to people who love Hawaiian music and culture, but are leery about performing. “I do exercise routines using hula steps, and it still gets people involved,” she explains, adding that hulacize benefits include greater flexibility and toning of thighs, upper arms, and abdominals, as well as improved posture. The classes include a 10-minute warm-up with chanting, 30 minutes of dance, and 10 minutes of cool-down using visualization and meditation. Marino, who grew up in Oahu and Kauai, says hula is more than just a tourist attraction. “It’s a philosophy, an attitude,” she says.

WHEN Heather Hardy, 24, first became a kickboxing instructor three years ago, her students dubbed the tough, 5-foot-4-inch, 120-pound martial arts expert “Little Hitler.” Not that the nickname fazed her. These days, Hardy is a much-sought-after instructor of kickboxing at Body Central Fitness Club for Women and the North Bay Kung Fu Academy.

“It’s not like step classes, lifting weights, or walking on a treadmill–people get bored with that stuff.”

Hardy says the empowering sport appeals to many women. “It gets out a lot of aggression, punching and kicking–things women aren’t ‘supposed’ to do,” she explains. “Some women are intimidated about throwing a punch, but they find the power. I love to see the change when that comes out.”

This intensive cardiovascular workout increases range of motion and really burns calories. “Anyone can do kickboxing,” Hardy says. “I don’t think anyone should be intimidated.”