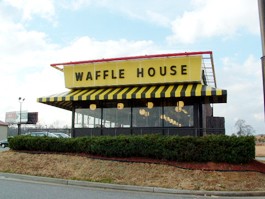 No way, man! Why’d you get a tattoo of Waffle House?!”

Like anyone with a prominent tattoo, I’ve come up with a variety of explanations for my Waffle House tattoo depending on my mood. I lost a bet, I’ll say. I made a dubious pact with some friends. I wanted to try to get free food. I love the songs on their jukebox. I’m on a one-man campaign to bring Waffle House west to California.

All of the above is true, but the real reason I got the tattoo is what anyone who’s ever been on the road with a band already knows: the Waffle House is the perfect tour stop. If it’s after a show and it’s 3am and you’ve only got 20 bucks in the band fund, the entire group can eat like royalty inside one of the bright yellow Waffle Houses that dot freeway exits across the southern Midwest.

Most people recoil at the thought of regularly consuming what the Waffle House serves up as “food.” But when I think about all the unsavory specimens I’ve eaten while on tour—tentacle cauldron stew in Spain, inedible vegan slop in Minneapolis, something I can’t even explain in Indiana—Waffle House’s food sounds downright glorious. And when I think of all the delectable home-cooked meals, the heaping plates at amazing hole-in-the-walls and the regional treasures one encounters between playing shows, it makes me wonder what I’m doing sitting at a desk writing this article.

So I turn things over to a handful of North Bay musicians to sing the praises—and curses—of their most memorable meal on the road.

Judah Nagler (The Velvet Teen) “When we were in Japan, we were treated to a meal called chankonabe. It’s apparently the favorite food of the sumo wrestler, a concoction of all kinds of different meat from a variety of animals and seafood. It’s served to you in a huge Crock-Pot, all mixed together in boiling liquids—really meaty, really tasty. But as a side dish, there was this sort of squid that they had, which looked really stringy and kind of gooey and gross-looking and dark, dark brown. It had the taste of sugar and chocolate and the sea and decay, all at once. It really tasted foul.”

Charlie Musselwhite “One of my favorite restaurants is Alcenia’s at 317 N. Main St. in Memphis. I love everything they have and I especially love their hot-water cornbread, as it’s just like what my mom used to make. Usually cornbread is a cakelike thing that’s too dry and crumbly for me. Hot-water cornbread is dense and moist. A typical rockin’ meal at Alcenia’s will be chicken-fried pork chop with turnip greens and black-eyed peas and mashed potatoes and fried green tomatoes. After you finish your greens, the juice left in the bowl is called ‘pot liquor.’ You dip your hot water cornbread in that pot liquor and, man, that’s some mighty fine down-home Southern eating.”

David T. Carter (Trailer Park Rangers) “In the town of Rio Vista, there’s a pub called the Longhorn. The wall is adorned with hundreds of animal carcasses from all over the world, from years back. It’s overwhelming—they’re all watching while you eat, all of them. While biting into her burger, my woman said she felt guilty. All I could think was, ‘Christ, the beef must have tasted so good back then.'”

Dan Kelly (Tegan and Sara) “Fazoli’s. If you haven’t heard of it, it’s because you live in California and there’s a Midwestern conspiracy to keep it away from us. It’s best described as fast-food Italian. What better combination is there in the world than soggy spaghetti and paper plates, especially at the low price of $3.29? Once on a cross-country trip, I spotted a Fazoli’s sign from the freeway. I immediately jerked the wheel of the 18-passenger Ford Econoline van—with double-axle trailer—and crossed no less than four lanes of traffic to just barely make the exit.”

Eden Mazolla (A Pack of Wolves) “Our most memorable meal on tour is a place we hit every time in Spokane. It’s called Neato Burrito—half burrito bar, half regular bar—and every Wednesday they have 50 cent PBRs. You start at one end of the burrito bar and choose everything you want from the type of tortilla, to the beans, to the meat. The best part is that they have a bunch of crazy shit like honey, barbecue sauce or veggies. Seriously, this is the best cure for an after-show hangover.”

Ben Henning (Polar Bears) “My favorite road-food experience wasn’t a full meal but rather an Italian shaved ice in Winter Park, Fla., in 2004. When I used to live there, I would always ride my bike to this little drive-through stand in the parking lot of a strip mall to cool off with passion fruit ice in moist 100-degree weather. When we were touring, we decided to check if it was still there; it had been seven years. Sure enough, intact all those years later with the same signed Rancid album cover inside the stand and the same fucking delicious, sweet and refreshing ice that had saved my life back in my early teenage punk rocker years. Chomping into it, the past rushed back to me like a tacky Florida version of Proust’s madeleine.”

Joni Davis “In Amsterdam, we [tried] a simple coffee shop, but they served open-faced sandwiches. There was fresh mint tea everywhere, so we got excited. I ordered a goat cheese sandwich with some mint tea, and out came a hunk of grainy bread with some sun-dried tomato pesto smeared on it. On top of that was a thick slab of goat cheese, the kind with a rind, and it had been toasted so it had a lovely light brown crust. On top of that was dressed rocket, and on top of that was half of a perfectly ripe avocado. Fuckin’ incredible!”

Ephraim Nagler (soundman for Cursive) “Tim Kasher and I shared a hot plate in Tokyo, where you cook your own meats and dip them in some different sauces and drink your Sapporo. We were asked all at once if we preferred ‘normal’ or ‘weird’ food. We of course asked for the weird. You got your usual tongue and whatnot, but it started getting freaky when they brought us womb and raw liver.”