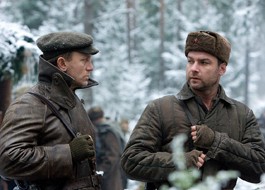 In his biography of John Sturges, film critic Glen Lovell quotes the director’s idea that only those who saw service in World War II could make good movies about it. This problem worsens the further we get away from that war. Edward Zwick’s true-life war movie Defiance wearily insists on the humanistic qualities of a group of partisans fighting for their lives, dividing up the forceful and gentle qualities of such warriors evenly between a pair of Jewish brothers. Ultimately, the film suggests that Daniel Craig’s Tuvia Bielski was a real-life Moses leading his people to safety.

Defiance starts in August 1941, with the German drive into Russia. A family of Jewish brothers survive the murder of their parents; chief among them are Tuvia (Craig), the smart one, and Zus (the bull-calf Liev Schreiber), the tough one. In Belarus’ Lipiczanska forest, other refugees join their band. Zus and Tuvia squabble over the approach to fighting off the Germans. As elder brother, Tuvia takes the role of avenger, executing the local officer who bounty-hunted the Bielski family for the Germans.

Sickened by the bloodshed, Tuvia decides never again to lower himself to the level of his enemies. Zus, in his grief, pounds his head against a tree; now daubed with a bloody mark of Cain, he leaves and takes up with a Red Army led band of guerrillas, despite Soviet cruelty and anti-Semitism. The two brothers conduct tension-wracked meetings over the years: “You’re my brother,” Tuvia reminds him. “So you remember,” Zus answers back. Eventually, the two meet in the middle, with the resolve to kill the Nazi—but kill them respectfully.

Why is Zwick, who exudes humanism like a blintz exudes cheese, drawn to war films? How Zwick’s film Glory worked is now clear. There simply haven’t been that many Civil War movies, and the former co-creator of TV’s thirtysomething almost had the war mostly to himself, visually speaking—not to mention a cast of first-rate actors.

The action sequences in Defiance, by contrast, never seem to take off. A raid on a German convoy at night starts with the trip-wiring of a Nazi motorcycle, but the sabotage is interrupted by the arrival of a German transport truck with mounted machine gun and searchlight, thus stalling what should have been a knockout moment.

The film’s climax, a partisan band’s attack on a Nazi tank, should have been thrilling, too. But Zwick’s bleeding heart just isn’t in it; he’s more involved in a re-enactment of The Godfather‘s famous intercutting between a baptism and a Mafia night of long knives. In Defiance, the two points are a wedding in Tuvia’s woods, sparkling with airborne snowflakes or pollen or something, complete with hora dancing, crosscut with Zus leading a shootout at a German headquarters (done with avant-garde stuttering frames to make it look like stop-motion animation).

Defiance could have been a film in which the humanity of the hunted was implicit. But as we get further from this titanic war, we keep getting films that consider the strife was all just good for the soul. Defiance deems the political side of the struggle is meaningless. There should be onscreen disclaimers: “No endorsement of the U.S.S.R. is implied in any way!”

The script reminds one of Robert Warshow’s comment about E. B. White’s equally inane propaganda essays during World War II: “History may kill you, it is true, but you have taken the right attitude.”