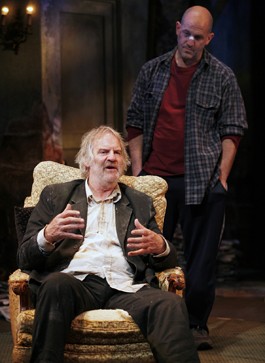 As one of the strongest North Bay  theater years in recent memory comes to a close, Mill Valley’s Marin Theatre Company has unfurled its best play of 2008. Conor McPherson’s bruisingly un-Christmasy holiday fable The Seafarer is an Irish redemption story with an edge, a tale of alcoholic dreamers, unattractive lovers, poetry-spouting devils, foul-mouthed saints and accidental heroes. It’s a beautifully and entertainingly wrought study in perfectly balanced opposites. Premiering on Broadway last year and immediately nominated for a Tony Award for Best Play, the MTC production, directed by artistic director Jasson Minadakis, is the West Coast premiere of what could easily become an alterna-Christmas classic.

It’s Christmas Eve in the coastal Irish town of Baldoyle, Ireland, and Sharky (Andy Murray), a notorious drinker and professional screw-up, has come home after a months-long stint as a chauffeur in Dublin (a job he’s just lost), to take care of his equally hard-drinking brother Richard (Julian López-Morillas), who’s recently lost his sight after hitting his head (falling into a dumpster, we learn) and seems to have lost interest in bathing or changing his clothes.

The brothers’ tenuously married friend Ivan (the hilarious Andrew Hurteau) has spent the night in their bathroom after a long night of alcohol abuse and poker playing, and is now afraid to go home, having certainly re-alienated his wife and family while also misplacing his eyeglasses, which makes him almost as blind as Richard.

These early scenes set the mood for the entire play: there will be much Irish-accented cursing (hundreds of fecks and dozens of Jay-sus-es), numerous examples of rascalish low-lifery and bottle after bottle of wine, whiskey, beer and Irish moonshine. In spite of this trio’s conspicuously unsavory approach to life, there is depth, wit and charm to the characters, and it does not take long to see the good percolating right along with the bad.

As the brothers prepare for Christmas, they encounter the insecurely obnoxious Nicky (John Flanagan), who happens to be living with Sharky’s ex-wife, and who inconveniently drops by with a mysterious stranger in tow, the well-tailored Mr. Lockhart (Robert Sicular), who quickly reveals himself (to Sharky, anyway) to be the Devil, come to play cards for Sharky’s recently sober soul.

The chief pleasure of the proceedings is the way McPherson challenges us to get to know these people and form opinions about them, perceptions he then alters as he guides us on our way to genuinely caring about them, losers or not, drunk or not, smelly or not. A richer, sweeter, more entertaining band of layabouts you are not likely to meet onstage.

As Sharky, Murray carries himself with a sense of wounded, tentative dignity, having discovered a glimmer of hope and human connection in his life, only to face eternal isolation in hell when Mr. Lockhart arrives to collect Sharky’s soul—unless Sharky can beat him in one last all-night poker game. As Richard, López-Morillas is a glorious mess of a man, simultaneously grateful and resentful of his brother’s presence, constantly deriding Sharky for his decision to quit drinking while making it clear that he needs him desperately.

As Ivan, Hurteau achieves a perfect blend of cluelessness and smart-hearted self-awareness, while the overconfident Nicky, as played by Flanagan, is oblivious to everything, including the danger he has subjected his friends to by bringing Mr. Lockhart into their home.

And what an invention Mr. Lockhart is.

Played by Sicular with a sad, world-weary cruelty that is as heartbreaking as it is frightening, Lockhart is a decidedly Irish Devil, equally prone to drinking, though not as experienced at it as his would-be victims, and just as fond of telling long stories. After one such story, Richard is moved to remark, “Well, that is one maudlin fucker.”

But there is nothing maudlin about The Seafarer (named after an ancient Celtic poem about a haunted mariner alone in a freezing storm). John Wilson’s gorgeous set anchors the action in the delightfully detailed squalor of the brother’s two-story home, but then establishes the fantastic side of the story as the set rises up into the rafters with a cavelike structure resembling the ancient Irish tomb of Newgrange. MTC’s edgy and wonderful holiday offering is a magnificent Christmas concoction of ribaldry, humanity, redemption, loss, love and good, twisty fun.