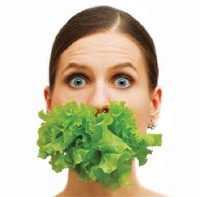 Who's to blame for our fat country? Maybe it's us

I once worked at a sausage cart in the park of an affluent city neighborhood. After my first day, I walked over to the alcoholic homeless men who hung out on the park’s benches to offer them a bag of baguettes we had left over. “No thanks, honey,” said one of the lounging bums. “Outside of white sugar, white flour is the worst thing for you.” His friend on a nearby bench nodded in grave agreement.

Coming from someone who was slowly but surely drinking himself into oblivion, that’s quite a bold statement. I admired the resolve of the homeless men, but their execution of a well-balanced diet was deeply flawed; their meals were mostly liquid, and vodka, their liquid of choice, provides little in the way of vitamins, fiber or minerals.

Many of us make similar, if less severe, dietary choices every day. We recognize what is good for us, but fail to implement it in our lifestyle. Are we stupid, lazy, greedy? Partly. But mostly we’re afraid. Our dysfunctional industrial food chain both numbs and overwhelms us, especially when we take in conflicting claims from splashy snack-food advertisements (eating poorly is fun!), health-nut magazine articles (eating poorly is fatal!) and confusing government recommendations (eating well is complicated!). We’re afraid of food, and it’s our fault.

Last month, the Center for Science in the Public Interest’s Nutrition Action! newsletter issued a list called “Ten Foods You Should Never Eat!” The list zeroed in on such naughty goodies as Mrs. Fields milk chocolate and walnut cookies, chipotle chicken burritos and Dove ice cream. Mrs. Fields was attacked for having “six teaspoons of sugar per cookie.” Interesting.

A 12-ounce can of Coca-Cola has the equivalent of about 10 teaspoons of sugar, but Coke’s not on the list. In fact, dozens of foods could easily be on the CSPI’s list; every grocery store crawls with them, lurking in the snack aisle and under the fry-buffet heat lamps at the deli.

Ultimately, pointing out ultra-specific “danger foods” accomplishes little except to prove how our society responds to easy shocks and fast payoffs. The CSPI’s list is the sort of thing someone e-mails to co-workers or talks about with friends over a Saturday-night plate of riblets at Applebee’s. “Did you know that Pepperidge Farm Original Flaky Crust roasted chicken pot pie is the worst thing you can eat?” It makes great gossip, and it’s a quick way to feel like you make fine nutritional choices simply because there’s not a box of Pepperidge Farm chicken pot pie in your freezer at home.

But we don’t like to hear it, perhaps because the good news about food is not very flashy. The CSPI’s alternatives to the 10 worst foods are mostly whole foods, like citrus, wild salmon and sweet potatoes; it’s like comparing apples to oranges, or, rather, Frito Lay’s light potato chips to oranges. You can’t say “Don’t eat potato chips, eat roasted butternut squash instead,” even though roasted butternut squash is delicious. Snack cravings don’t work that way. Cravings are about crunchy, salty, sweet–now!

Junk food tastes good sometimes. It’s the edible equivalent of American Idol and Gwen Stefani songs. Despite what billions of dollars of advertising and prominent displays at grocery stores tell you, that’s what we need to understand junk food is for–for sometimes, not all of the time. The occasional McDonald’s won’t kill you; lots of McDonald’s kills you.

Actually, it’s the choice to eat lots of fast food that kills us. And we are the ones who make that choice. For all of the blaming going on, there’s one person who is in charge of what goes into your mouth: you.

So where did we go wrong? In his much-discussed Jan. 28 New York Times Magazine article “Unhappy Meals,” Michael Pollan points to what he calls “nutritionism,” the system of scientists researching the impact of an isolated nutritional component and the press pouncing on the findings to get a story. Pollan argues that because nutrients don’t exist in a vacuum–they exist in food, and therefore are part of our larger, very complex lifestyle–such studies are inherently flawed and can misdirect our choices. A study concludes to eat less fat, so we cut down on fat; a study says to eat more omega fatty acids, so we drink flaxseed oil; a study says that flaxseed oil supplements can actually harm us, so we dump out our flaxseed oil.

What Pollan does not say is that we’re the ones dumb enough to believe every AP article and every investigative report on 20/20. When did we lose the ability to think for ourselves? When we got scared. By pointing out the dangers in food, we don’t create logic; we create confusion and fear. We know that heavily processed food is bad for us, because we can see the results with our own eyes, but we still eat it, because facing our fear of food is too daunting.

Instead of thinking about food as medicine or poison–something we are rewarded or punished for eating–we need to think of it as food. Food that comes from plants and animals, not factories and drive-throughs and laboratories.

And that’s where one group, who are sadly not in control of what they put in their bodies, comes in: kids. Parents and schools feed kids, and many of them do it badly. Kids love junk food, especially when so much of it is designed to appeal to them. Kids are too young to be accountable for all of the decisions they make, but they are old enough to be taught how to eat. That education used to happen from living life, from helping to prepare meals and sitting down with the family to share them; it was intrinsic knowledge. Now it’s not–food is an entertainment choice, a way to kill time, a thing that takes too long to make from scratch–and they’ve learned that from us.

We need to compromise, and there’s not much of that going on. Big Brother does not compromise. Two major cities–New York and Philadelphia–have banned trans fats. The intent to protect citizens is noble, but will it accomplish anything? Maybe the solution is to stress eating well, not to simply remove one of the things that make people unwell.

Small pockets of activists are doing just that, empowering people with knowledge and decision-making skills. Food Not Bombs feeds vegetarian meals to homeless people (hope they’re skipping the white flour); farmers markets are going up in blighted urban areas without local access to grocery stores; and programs like Alice Waters’ Edible Schoolyard, which teaches kids where food comes from because they grow it themselves, are blooming. It’s not much, but it’s something.

Of course, to look at it from a strictly pragmatic perspective, regulating what people can and cannot eat could save our country tons of money. All of this type II diabetes and heart disease is expensive, and we fat taxpayers wind up footing some of the bill. It’s an extreme measure for a situation that, every day, is more extreme itself.

Americans love to blame other people for things. We’re fat, and it’s the fault of agribusiness or fast food or the government or my family who never taught me to eat right. People grow up and become adults and make their own choices. The tools to eat well are there for them. Are we really that stubborn and ignorant? I guess so.

I’m not afraid of food. It won’t kill me; it keeps me alive, because I eat to live and not vice versa. Every time that we polarize the role of food in our lives, we further tear apart the natural order of things. To end the cycle, we need to give fear the middle finger and eat like human beings. The first step is to think for our own bodies, our own selves.