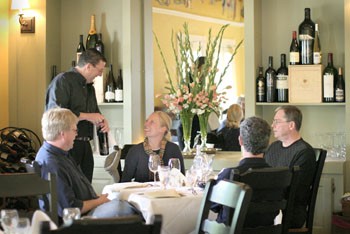 Dazzled by cheese at the Farmhouse Inn

Someone got to the cheese cart first. Well, I guess a lot of people did, which is a good thing, because a cheese cart cannot sit around for too long before the cheese-loving world at large discovers it. They discovered the Farmhouse Inn’s offerings beyond cheese, too–the quaint country setting, the gifted executive chef Steve Litke and sous chef Joe Giunti, the impressive wine list.

The best part was that this word of mouth was all very gradual, increasing as the brother-sister team of Catherine and Joe Bartolomei, a fourth-generation Forestville family, re-outfitted the rooms to Food & Wine-like standards of poshness.

So finally we made reservations. Dusk was falling as I pulled into the parking lot, and everything looked silent and still. Through a large, open picture window in one of the guest rooms, I saw a server in a black vest and tie stride in, carrying a tray with two glasses of twinkling champagne for a young couple.

Stepping out of the car into the falling night, I heard the surreal strains of “Magic Carpet Ride” wafting over from the Inn’s grounds. Steppenwolf? Classic rock emitting from a romantic wine country setting can only mean one thing: wedding. To be sure, under a crisp white tent stood a young woman in a white dress, surrounded by attendants. Not even five minutes into the evening, I had been able to witness two picture-perfect, travel-brochure vignettes.

Inside the Farmhouse Inn, the space is refined and cozy. Along the walls of the dining room runs a mural, painted by Sebastopol artist Alice Thibeau (whose work can also be seen at Screaming Mimi’s) depicting images of the Bartolomei family taken from old photographs. The rest of the walls are in warm yellows.

Chef Litke’s menu, which changes daily, makes as much use of seasonal, local, and organic ingredients as possible. With five starters and entrées each, it’s on the short side, but everything looked alluring and we took our time ordering.

Overall, our starters were inspired and enjoyable, but they didn’t knock our socks off. A potage of nettle, leek, and golden potato ($7) was smooth and rich, delivering hearty flavors rather than the fresh ones I was expecting. A chiffonade of tangy sorrel and a swirl of crème fraîche brightened up the soup’s heavy profile.

The carpaccio of Japanese hamachi–yellowtail tuna–($13) came with a tart Meyer lemon vinaigrette dappled over the fish. “It’s sort of ceviche-ed,” said Amie du Jour. Tiny slices of colorful Easter-egg radish and microgreen sprouts sat beneath a slice of a petite cucumber-avocado terrine, a fresh little thing that was almost an elegant nouvelle cuisine throwback to those weird 1950s vegetable jello salads.

The flavors in the seared breast of squab and wild mushroom terrine ($13) were perhaps too intense to fully benefit from their intimate proximity to each other. Braised porcini, chanterelle, and shiitake mushrooms were hugged by meaty nuggets of foie gras, and the power of both dominated the squab breast.

With this we had a medium-bodied, crisp, and mildly chalky 2000 Billaud-Simon Chablis, a Chardonnay for non-Chardonnay drinkers and, at $14 for a half-bottle, a good value. With our entrées, we had the acidic and fruity 2001 Siduri Pinot Noir ($33 half-bottle) from the Santa Lucia Highlands in Monterey County. The Inn’s wine list offers over 90 bottles, and while the emphasis is on Californian wines, there’s also a presence of imported bottles and wines from other states.

The entrées hit the mark more than the starters, and their impression lingered in my mind long afterwards. The dish whimsically named Rabbit, Rabbit, Rabbit ($25)–the one constant on the Farmhouse’s menu–was excellent in concept and execution. The tines of a tiny rack of rabbit stood up, Frenched, like a brigade of toothpicks, flanking a confit of rabbit leg splayed in the center of the plate. A bacon-wrapped cylinder of rabbit loin stood on its end–all three items coming together to demonstrate the gourmet remains of exactly half a bunny.

The confit was luscious, not as salty-fatty-cloying as its ducky counterpart, and the loin was juicy. A pale-yellow, whole-grain mustard cream sauce accented the dish without dominating it.

I had the pan roasted halibut with crème fraîche mashed potatoes ($25). The lemon-thyme butter sauce and the potatoes virtually dissolved into each other. Tiny Coos Bay shrimp (from off the Oregon coast) generously dotted the sauce; they looked like those awful little pink canned shrimp but were delicate and sweet. A small plume of sea beans–a spiky plant that grows on coastal cliffs–sat atop the halibut and added a touch of salty greenery.

Poussin “sotto mattone” ($25) was probably the most refined presentation of chicken under a brick I’ve ever seen. Its stint under the eponymous brick (actually a cast-iron skillet, according to our server) had rendered its skin golden and crispy, and the young chicken itself was moist and tender. A springlike ragout of fava beans, asparagus, and fresh morel mushrooms accompanied the poussin.

We were unable to resist the cheese cart ($21 for three of us). All throughout dinner, we saw maitre d’ Joseph Bain wheeling the cheese cart to tables throughout the dining room. Not a lot of restaurants offer tableside service like this anymore, which is a shame, because it is where gifted servers are truly allowed to shine, performing a reserved ballet in the art of dining-room showmanship.

I’d liken the cheese-cart experience to watching fireworks. It’s that dazzling, if you love to hear people with foreign accents talk about cheese. In the words of Bain, “There’s nothing like the site of lovers, family, or friends sharing a plate of wonderful cheeses. In their eyes, there’s often a look of discovery and profound satisfaction.”

Or in my case, blank awe. As Bain was halfway into describing each of twelve cheeses, scooping generous portions of each one onto a plate, my eyes glazed over. It was like Christmas morning, and I could hardly wait to open our presents.

Farmhouse Inn ages their cheeses in-house to ensure their perfect ripeness, and their origins span from Sonoma County to Spain. Standouts included the two goat cheeses from Soo Young’s Andante Dairy in Santa Rosa, whose “Minuet” was firm yet soft, with both creamy and pasty textures.

Pierre Robert’s triple-cream cow’s milk from Normandy (which seemed more like quadruple-cream, so luscious was it) had a long, buttery finish with nutty undertones. And the grand finale cheese, Bleu des Basques from the Pyrenees, had a multiple personality from start to finish, with fruit, funk, and black-pepper notes.

Throughout the evening, the service was spot-on professional, and we were not once in want of anything. While weaving our way down the international path of cheeses, it felt ascetic to wash it all down with water, and perhaps our server sensed this travesty when he brought us a mellifluous glass of 1996 Château de la Oulerie from the Loire Valley.

The cheese cart was really untoppable, but the dinner’s conclusion of warm panettone bread pudding ($7) was the best bread pudding I’ve had, airy panettone in a silky, golden custard. We ate the accompanying Grand Marnier Chantilly cream straight from the ramekin with our spoons.

We were almost the last table to leave, because properly savoring all of that cheese takes a long time. What could have topped a belly full of wine and cheese? A guest cottage, maybe, with a server bearing glasses of champagne. As it was, I got in the car and drove home to dream of cheese.