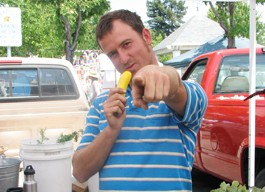 In tribute, honor and

Magazine and newsprint writing about farmers these days has all the oh-my-God! swoon of a CosmoGirl blogger catching the Jonas Brothers shopping for boxer shorts. Simply put, there is nothing hotter than a farmer right now. Growing food, not unwrapping it from some hermetic plastic shell, is suddenly hip and sexy—perhaps for the first time since Laura Ingalls met Almanzo Wilder. And what is sexier and hipper than being the very purveyor of said hipness itself? Indeed.

We’ve decided not to hide behind any meek tip-toe about our farmer adoration and to just straight out treat them like the rock stars they are. Accordingly, we’ve asked them the kind of inane questions that are inevitably posed to pale-limbed, heroin-chic guitarists. Not surprisingly, their answers are smart, funny and, most of all, fresh.

Biggest Hit: “Dry-farm tomatoes. We water once and walk away. The plants reach for deeper water. The tomatoes have a tougher skin, but they’re sweeter. You have to be wearing socks when you eat them, because they’ll knock them off.”

First Pick Up Your Instrument? Brandon Pugh: “I grew up in Arkansas. My mom had a backyard garden. I remember her shelling peas on the newspapers. I got into gardening right outside of high school.”

Brian Riva: “My family grew our own food in New York’s Hudson Valley, near Clinton’s Corners. I remember picking apples.”

Worst Review: “Gophers! I speared one today with a pole. They’re a pain in the neck. They’re crazy. Not only do they eat our plants, I hate stepping in their holes.”

Biggest Surprise: “That’s a tough one. The strawberries. I was surprised how big they were. They were as big as a baby’s hand. I had a strawberry that took three bites to eat—it was a three-biter.”

Best Acoustic Performance: “Strawberries. We can’t keep them longer than two hours in the market. They sell out. You can’t stop eating them. They rock.”

Biggest Hit: “Berries. Especially strawberries.” (A customer interrupts and says enthusiastically, “They’re red through and extremely flavorful. Chez Panisse and Aqua restaurants buy them from her.”)

First Pick Up Your Instrument? “We had a victory garden during World War II, but we didn’t work it ourselves. We had a gardener. My father was a lawyer and commuted, and my mom had no interest in gardening. I was about 11 or 12 years old; I did the flowers. My mom thought that I was a genius because I planted zinnias so thick that they looked like shrubs. She thought that it was a miracle that anything would come out of that patch since we lived outside of Chicago. I also planted iris and petunias.”

Worst Review: Skall laughs. “I have so many I don’t know where to start. I hate talking about negative things. I’d much rather celebrate. I have peach trees that die all the time, sometimes at one year, sometimes at 25 years. I’m much more in favor of good news.”

Biggest Surprise: “Oh gosh, I live in the moment. I can’t think of any.” (The interviewer suggests, as an example, finding 10 gophers dead without doing anything to kill them.) Skall laughs. “I’d go for that fantasy anytime.”

Best Acoustic Performance: “Asparagus. I don’t eat between meals, but the young fronds are delicious. If I find them in the garden, I’ll have a little midday snack.”

Biggest Hit: “I don’t have a favorite. I pretty much love all of my flowers. I think all of the flowers that I grow can be my favorite. Foodwise, when there’s corn in the field, I like that. I like to see the corn growing, and my mouth waters when it’s ready. Corn has been a part of my life all my life.”

First Pick Up Your Instrument? Jesus “Chuy” Soto started with Oak Hill working backstage as a handyman. “I did all kinds of repairs on the farm, from roofing to plumbing to maintenance.” But nurturing the soil was in his blood. “I grew up on a farm in Mexico. Ever since I can remember, I grew things—crops, beans, corn, hay. I grew things for the family, not as a business, but nevertheless, it was year after year. I knew something about how to prepare the soil, things like that.” In 1997, Chuy was tapped for a lead role with the farm’s beautiful blossoms, and he’s been starring with the flowers ever since.

Best Acoustic Performance: It’s all acoustic for Soto. “We’re an organic farm. The preparation of the soil starts in the fall. When the season is done, we cover the field. The cover crop is a mixture of barley, vetch, oats. Flowers don’t need as much to grow as other crops. I think vegetable growers use more organic fertilizers. I don’t use much, or any. I just use cover crops in the fields, and in some of the lower fertility fields, I use some compost.”

Biggest Hit Lee: “Strawberries or tomatoes are our bestsellers, but they don’t necessarily grow the best because they’re so dependant on the weather. It used to be the chipotles, but that’s during the winter.”

Wayne: “It’s the tomatoes. No contest.”

First Pick Up Your Instrument? Wayne: “I remember first growing sweet peppers and sunflowers. I loved sunflowers and I still do, and plant them all the time! They’re so impressive. I loved how completely yellow they were as a kid.”

Lee: “I was very into flowers. We always had some around in the house.”

Worst Review Lee: “I once planted an entire two acres of winter squash while Wayne was away with the Peace Corps. It was all seeded and beautiful and sprouting. I went down three or four days later and it was completely bare. The deer had gotten all of it! There wasn’t a piece of greenery left. I just remember staring at it and sobbing.”

Best Acoustic Performance Lee: “Strawberries. Those are definitely the best. Maybe tomatoes, like cherry tomatoes, but strawberries win each time for me.”

Wayne: “Oh yes, strawberries, of course, but carrots can be great, too. You gotta wipe off the grit a little, but it’s worth it.”

Wayne: “I honestly can’t think of anything else I would rather be doing than what we do here. It’s who I am, completely.”

Biggest Hit: “Potatoes. I grow 22 varieties including Purple Peruvian, Yukon, German, Butter Ball and Swedish Peanut, which is a fingerling peanut-shaped potato. I also grow an acre of popcorn, and two acres of winter squash.”

First Pick Up Your Instrument? “Grandma planted a garden in five-gallon buckets. My grandpa was a miner in Sierra County, and the soil was too rocky to plant in. I helped my grandma grow tomatoes, cucumbers and lemon cucumbers. It was the first time I had ever seen a lemon cucumber.”

Worst Review: “None so far, except weeds. And gophers!”

Biggest Surprise: “That’s a good one. I’m never surprised. I guess off-the-wall garlic. An old guy in Occidental gave me some garlic, including Blue Ukrainian and Pink Music. I started with three heads and ended up with 10 pounds each.” (The interview is interrupted by a woman asking, “How do you plant them?” Stogner answers, “Just shove ’em in the ground.”)

Biggest Hit: “I specialize in native plants, medicinal herbs and mushrooms such as oysters, shiitake and mitake.”

First Pick Up Your Instrument? “I first started growing carnivorous plants when I was 12 years old. It was the classic little-boy fascination of bug-eating plants. I hand-pollinated and hybridized them, and started propagating them from seed. That led to propagating native plants.

Worst Review: “I lived in Monte Rio and had grown carnivorous plants for three years. When I was 15 years old in 1995, a flood came and washed my whole greenhouse away. All my unique plants grown from hand-pollinated seeds were gone. I gave up plants for a few years after that.”

Biggest Surprise: “My biggest surprise is getting rare plants to germinate, like redwood lilies from field-collected seed.”

Best Acoustic Performance: “Huckleberries and gooseberries—but I don’t sell the fruit, I only sell the plants.”