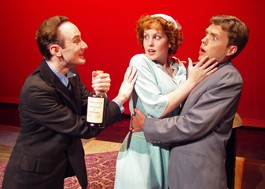 As a theatrical art form, farce is not as easy to pull off as it often looks. A director once told me that, in her opinion, a well-played farce requires six things: three from the script and three from the production itself. In the script, there must be numerous misunderstandings and/or mistaken identities; there must be characters running in and out of rooms, preferably slamming doors as they do; and there must be a ridiculous conclusion in which all the damage previously done is repaired with an improbable speech taking place with all the characters onstage at the same time to hear it.

As for the production, a successful farce requires a cast and crew with relentlessly high energy, a director with impeccable comic timing and actors who play their characters broadly enough that they never seem like real human beings (otherwise we’d hate them for the stupid and cruel things they do), but not so broadly that we can’t identify with them at least a little.

Sonoma State University’s current production of Georges Feydeau’s 1907 farce A Flea in Her Ear meets five out of six of these requirements, as well as one additional factor that I feel is necessary: the actors must appear to be enjoying themselves, because when they do, the fun is usually infectious. That is mostly true of this production, which on opening night landed two or three laughs for every missed opportunity.

The still-hilarious, 100-year-old play, updated slightly to the mid-1950s in this raunch-filled, pun-packed translation by David Ives, begins in the middle-class Parisian home of M. Chandebise (Peter Warden, recently seen as Caesar in Narrow Way Stage Company’s Julius Caesar), an unassuming if somewhat high-strung businessman whose wife, Raymonde (Rebekkah Patti), is alarmed by a recent lack of libido on her husband’s part, made more suspicious when a package arrives from a disreputable establishment known as the Frisky Puss Hotel. Upon opening the package and discovering.

M. Chandebise’s favorite suspenders, Raymonde assumes that her formerly faithful spouse is now romping among the cheating kind and has left his suspenders behind after a tryst with another woman. With the help of her unhappily married friend Lucienne (Margot Parrish), Raymonde sets out to catch him in the act.

That everyone should end up at the Frisky Puss at the same time is a foregone conclusion. A gaudy establishment designed for quick assignations, the Puss is owned by M. Feraillon (Nick Christenson), a coarse, quick-tempered man whose hotel is not the classy franchise he thinks it is. Consistent with this type of French farce, there is a great deal of bed-hopping but a surprising lack of actual sex, as everyone becomes too consumed with avoiding and deceiving one another—and accidentally tripping the switch on a spectacularly revolving, hidden door bed—to actually stop and do the deed.

Under the experienced direction of guest artist Hector Correa (the artistic director of the Pacific Alliance Stage Company), the pacing and comic timing of all those entrances and exits is very well done, and the sets, by Eric Reed, are delightfully full of entertaining detail and moving parts.

The only problem lies in the way the actors, or most of them, fail to step up to the level of fantastic, outsized cartoonishness required for effective farce. With the exception of Warden’s dual performance (he always seems to be flying in 10 directions at once), Darcy’s desperately incoherent Camille, Kelly Dixon’s hot-to-trot housemaid Antoinette and Spell’s wacky turn as the demented Spaniard (I especially liked the way he pronounces the name Chandebise as “chande-bitch”) most of the actors, even when “acting big,” seem a little too grounded in reality to elicit the laughs the script laid out for them. All they need is an additional dash of inspired mugging, and this Flea will be biting in all the right places.