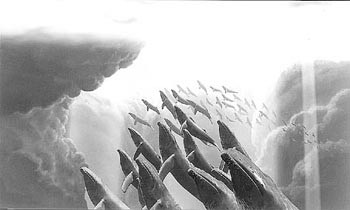 Writer David Templeton takes interesting people to interesting movies in his ongoing quest for the ultimate post-film conversation. This is not a movie review; rather, it’s a freewheeling, tangential discussion of life, alternative ideas, and popular culture.

I’M LATE–and that’s just the beginning of it. Having sprinted several blocks along the streets of San Francisco after playing “Where’s Waldo?” with local parking spaces, I’m nearly hit by a speeding bike messenger as I cross the street to enter Metreon, the cavernous new high-tech entertainment complex. Pulling my daughter’s jingling, multicolored jester’s cap from my backpack, I reluctantly slip the thing onto my head and start searching for a tall, bearded fellow wearing a clown nose.

That will be Allen Klein. A best-selling author (The Courage to Laugh, The Healing Power of Humor, and others) and public speaker, Klein is known in certain circles as a “jolly-tologist.” Having never met before, however, we’ve settled on this whimsical hat-and-nose recognition system by which Klein–who is no stranger to either whimsy or clown noses–and I will be able to find each other.

The system works, although by the time I get there Klein is merely holding his nose in his hand.

“I was wearing it for a while,” he says, laughing, as we snap up our tickets and scamper, bells jangling, toward the immense Imax theater, where Fantasia 2000–recently released in 75 Imax theaters around the world–has just begun.

An update of Walt Disney’s classic 1940 animated spectacle, this new version features all-new segments of animation set to rousing classical music: a pod of whales cavort amid Antarctic icebergs, then take unexpected flight among the rolling clouds, set to Ottorino Respighi’s soaring Pines of Rome. Donald Duck helps Noah fill the ark as Edward Elgar’s Pomp and Circumstance thunders by, and Hans Christian Andersen’s classic story “The Steadfast Tin Soldier” springs to Disney-fied life with the Allegro from Dmitri Shostakovich’s Piano Concerto No. 2. Finally, as Igor Stravinsky’s manic-depressive Firebird Suite plays on, the sprite-ish spirit of spring rises from her winter sleep and awakens the earth, is chased and destroyed by the lava-spewing spirit of fire, and finally rises from death to bring life once more to the world.

“What an incredible experience,” sighs Klein, as we make our way from the theater. “I admit I was feeling a bit rushed and tense there, but the moment I sat down and saw those whales and the little funny baby whale–it all just melted away.”

KLEIN, WHO SPENDS his weekends at his “other home” in Sebastopol, knows a thing or two about the influence of art and humor on the human mind and emotions. A sought-after expert on the healing powers of laughter, Klein has handed out thousands of clown noses at his seminars. A former art director for the Captain Kangaroo Show, in the ’60s, Klein says his knack for whimsy changed his life after the death of his wife in the early ’70s. It was his wife’s ability to laugh at tragedy, even during her illness, that inspired Klein to return to college for a degree in human development, with an emphasis on humor. He was soon asked to write and speak on the subject.

“Suddenly,” he explains, “I was a jolly-tologist.”

As we discuss Fantasia 2000 over lunch, I mention my one quibble with the film: the ending of “The Steadfast Tin Soldier” segment, significantly altered from Hans Christian Andersen’s bittersweet original. In this one, the tin soldier wins the heart of the ballerina doll and defeats the evil jack-in-the-box; in the original, both the soldier and the doll perish in the fireplace–leaving only a small tin heart in the next morning’s ashes.

“Well, happy endings are important,” Klein says. “Granted, I never read the original story, but I was satisfied with the ending of this one.”

Klein even believes that fiction’s happy endings can be healing.

“Happy endings have an incredible power,” he says, “a power that can help get people through difficult times. We can look at a movie think, ‘Hey, my life is kind of terrible, but maybe there’s a reason to hope, maybe a happy ending is around the corner, maybe if I keep going, things will turn around for me–like they did for the person in the movie.’ ”

“Yet there are those who would argue that happy endings give us a false expectation that everything will turn out wonderfully,” I reply. “Beyond movies and books, is there really any such thing as a happy ending?”

“I couldn’t see any happy ending to that story.

“But I had to force myself to say, ‘There’s got to be something else to this story,’ ” Klein recalls. “So what am I supposed to do with my life now?’ I know it’s cliché-ish, but good things often come out of bad.

“You know, the real truth is,” says Klein, reaching into his pocket to present me with my very own clown nose, “that there are no endings–happy or otherwise. Life is not a movie or a short story or a novel, with a final reel or a final page. I may die, but the story continues without me.

“We saw that today in the movie, in the last sequence,” he reminds me. “The big fire, total destruction, and yet there was a rebirth of life. Life, death, and birth, and life–our story keeps on going.

“I don’t know about you, but I’m pretty happy about that.”