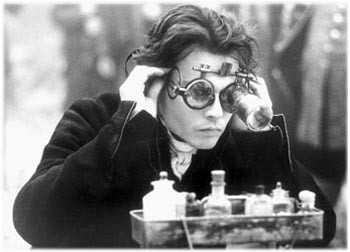 LOOKS LIKE Halloween came early this year. It’s no secret that the one independent movie that earned studio respect this year was The Blair Witch Project. So, naturally, the upcoming season features many excursions into the October Country, to use Ray Bradbury’s phrase.

Gabriel Byrne works the muscles of his weary puss as a Vatican troubleshooter investigating a case of demonic possession in Stigmata (Sept. 10). Byrne also plays the devil to Arnold Schwarzenegger’s Satan-hunting cop in End of Days (Nov. 24). Dogma–if it is ever released–is Kevin (Clerks) Smith’s cosmology, which has angered Catholics enough to persuade Miramax films to sell it off to another studio. The casting of Alanis Morissette as God has especially piqued Catholic groups.

In more Satan-related cinema: Lost Souls (Oct. 8) with Winona Ryder and Ben Chaplin as a couple hunted by the devil, and Ride with the Devil (Nov. 12), a Civil War drama starring the best-selling American poet alive, Jewel. (But I cheated putting this here: Jewel doesn’t play Satan.) Stir of Echoes (Sept. 10) is a supernatural thriller set in Chicago, based on Richard Matheson’s 1958 novel, in which a blue-collar guy (Kevin Bacon) finds himself with unwanted psychic powers.

Horror of a different sort lurks in the season’s most exciting offering: Bringing out the Dead (Oct. 22), the new Martin Scorsese/Paul Schrader effort, starring the husband and wife team of Nicolas Cage and Patricia Arquette. Cage works too-long night shifts as a New York ambulance driver, losing his mind as the hours go by. A vintage punk-rock soundtrack overlays Cage’s odyssey.

The Fight Club (Oct. 15) is the new film from David Fincher (Seven, The Game). Fincher is one of the few directors today whose morbid mood and strength of composition can transcend an uneven script. The story sounds repellently faux-macho. It’s about a city club where bare-knuckle amateur fighters meet to slug it out. Also, The Fight Club stars Brad Pitt, who has proved himself over the years as the worst kind of screen blight–the pretty-boy deluded into thinking of himself as a cutting-edge artist. Thus, a long career of miscasting. But Fincher’s deadly visions of rotting downtown splendor have been compelling in the past. And The Fight Club might be the film in which Fincher has found a story as good as his imagery.

For comedy, two promising efforts are Man on the Moon (Nov. 5), with Jim Carrey playing the ’70s comedy-of-cruelty comedian–or was he a performance artist?–Andy Kaufman. And Tom Hanks and Tim Allen return in Toy Story 2 (Nov. 24). Ace comedienne Joan Cusack does the voice of Cowboy Woody’s gal-pal from his ’50s cowboy TV show.

Mumford (Sept. 24), shot in Sonoma County, concerns a psychiatrist who weasels his way into the lives of a small town. It’s directed by Lawrence Kasdan, the co-scriptwriter of the only good Star Wars movie, The Empire Strikes Back.

Eric Rohmer’s Autumn Tale (September) wasn’t shot in our own wine country  . . . but only the subtitles really make the difference. Rohmer’s effort could easily be set in any of the less-wealthy pockets of Sonoma or Napa. Autumn Tale is the story of a handsome, hippie-ish middle-aged single woman (Beatrice Romand) in charge of an unpopular Côte du Rhône vineyard. This droll, delicate, but tough-minded romance touches on more than just love: it also studies the ugly development of farmland, and a young girl’s determination to never let her heart rule her head. How French, you’d say. But really, how Northern Californian. Autumn Tale makes the recent Hollywood versions of the search for older love (such as You’ve Got Mail) look even more puerile.

This fall also includes some disturbingly underbuzzed efforts from filmmakers who provide some of the best works of the last 10 years: Atom (The Sweet Hereafter) Egoyan’s Felicia’s Journey (Nov. 12) is a harrowing tale starring Bob Hoskins as a “befriender” of homeless girls in grim Birmingham, England. David Lynch’s eccentric The Straight Story (October) is the uncharacteristically wholesome (!) story of an elderly man crossing Iowa on a rider-mower. Director Steven Soderbergh, whose Out of Sight was one of the best of ’98, returns with The Limey (Oct. 8), a gangster revenge story with Terence Stamp as a British ex-con outsmarting L.A. thugs. Lastly, there’s Holy Smoke (Oct. 22), Jane (The Piano) Campion’s tale of the affair between an older man (Harvey Keitel) and a younger woman (Kate Winslet), to be released sometime this fall.

Next we’ve got James Bond blowing up the Bohemian Club to foil a Republican madman’s plot to hoard the world’s supply of Viagra  . . . and then I woke up. Actually, the soap-opera title The World Is Not Enough (Nov. 19) is an inside reference–it’s the Bond family motto. In the newest episode, an injured 007 (Pierce Brosnan) travels from Bilbao to Central Asia to Istanbul, tracked by an assassin (Robert Carlyle, the dangerous Begbie from Trainspotting). There’s also a bigger role for Judi Dench as M, and John Cleese turns up for a cameo as Q’s successor, R.

Naturally, the Bondian madness is also grounded with fall-season horror–the threat of the usual nuke in the usual worst place possible. And that certainly won’t be the only bomb we’ll see in the next few months.