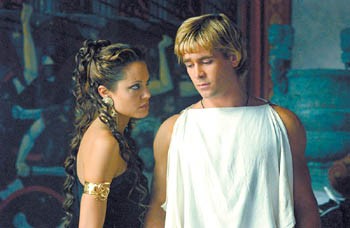 King of Kings: Angelina Jolie and Colin Farrell play at royalty in ‘Alexander.’

Elephants, Thackeray and dinosaurs rumble up as the fall film season begins

After Labor Day, gross summer fare yields to the somewhat higher-brow fall season. Yet, in the distance, one sights the shuffling bulk of an approaching herd of white elephants. I mean, of course, the Oscar film season–still only menacing, but not, thank God, here yet.

There are elephants enough for everyone in Oliver Stone’s Alexander (Nov. 5), the story of the Macedonian emperor who conquered the world. So much for that libel that gay men are unmanly. Colin Farrell plays the 32-year-old emperor who gave the centuries a lasting lesson on the futility of ambition. Angelina Jolie is his barbarian queen, appearing regal in something low-cut.

On the way to elephants there are dinosaurs, as demonstrated by A Sound of Thunder (Oct. 8). Based on Ray Bradbury’s famous short tale, Thunder follows the clumsiness of dinosaur hunters on safari and the repercussions of one false step a few eons down the line. Edward Burns is the guide on tyrannosaurus hunting safaris; Catherine McCormack is the inventor of the time machine.

Just in time to save parents everywhere from the 500th viewing of Finding Nemo comes Shark Tale (Oct. 1), a slightly more adult version of the computer-animated fish movie. An all-star cast has the voice of Will Smith as a fish in trouble with the Shark mafia. Jack Black co-stars as a shark-enforcer who’s a vegetarian at heart; Angelina Jolie is a fish fatale; and Martin Scorsese voices the role of a fast-talking blowfish. Also for the PG set, The Incredibles (Nov. 5) is Pixar’s newest, concerning a superhero family with the usual family problems. Older Pixar fans finally get to see some leotards, force fields and explosions.

David O. Russell’s I Heart Huckabees (Oct. 15) is an almost indescribable cultural-war allegory by the director of Spanking the Monkey and Three Kings–recommendation enough right there. It’s about conflict between an open-space activist (Jason Schwarztman) in dubious battle with an executive (Jude Law) at Huckabees superstores. Pawns–or perhaps generals–in the game include Isabelle Huppert, Naomi Watts and Mark Wahlberg.

Speaking of culture wars, Kinsey (Nov. 12), one of the more intriguing films this fall, concerns Alfred Kinsey, the pioneering sexologist and most fascinating Hoosier this side of Kurt Vonnegut, having fired the warning shot in the sexual revolution. Liam Neeson plays the good doctor; Bill Condon (Gods and Monsters) directs.

Exhibit A in a study of the less savory side of marriage is Mira Nair’s version of Thackeray’s Vanity Fair (Sept. 1), with Reese Witherspoon as that demigoddess of impertinence, Becky Sharp. Thackeray is impossible to adapt to screen without a hell of a lot of narration; Nair tries to do without, and the film’s a little dizzying. Still, there are worthwhile turns by Bob Hoskins as the slovenly Sir Pitt Crawley, Eileen Atkins as Sir Pitt’s rich relation Miss Crawley and Jonathan Rhys Meyers as the stuck-on-himself Capt. George Osborne.

In decidedly different society rise The Yes Men (Oct. 1), a documentary about a pair of cyber-squatting pranksters who bedevil the World Trade Organization. These masqueraders try to find out how much sadism the moneymen will endorse before realizing they’re being put on by a pair of performance artists in thrift-shop suits.

And while this summer’s been a watershed for political movies, our cinema fortunately hasn’t neglected the ever-present problem of sudden zombie attack. Shaun of the Dead (Sept. 17) isn’t just the funniest British film of the year, it’s also one of the best films of the year, period. Edgar Wright’s grisly satire of desperation-as-the-English-way tells of a McJob sufferer (Simon Pegg) who has his sad little heart broken and drinks too much with his couch-camping (nay, couch-homesteading) mate Ed (the amazing Nick Frost). The duo wake up besieged by hangovers and ravenous zombies alike.