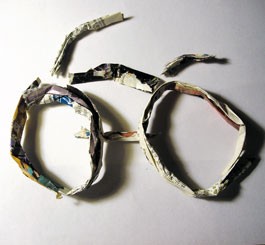 When every 100-calorie morsel of sustenance for the athlete comes in the form of processed goop contained in a disposable foil packet, we know that the cycling industry has completely traded cleanliness and efficiency for slick, processed, artificial imitations of the same.

But is it anyone’s business what another eats? In fact, it is, for when a cloned Lycra nerd throws his gel wrappers on the public pavement, it becomes everyone’s business. I’ve never seen a cyclist in the act of such littering, but I suspect the culprits responsible for the endless road waste we see on popular cycling routes are the same roadies who leave their spent tubes on the ground.

I can imagine them, panting up a moderate grade with candy wrappers dangling over their chins. Perhaps it’s Mt. Tamalpais, a favored route strewn generously with energy-food wrappers. Though this route is a degree less challenging than many like to imagine, these weekend warriors suck their calories from a foil package of syrup and fancy they wouldn’t make the distant summit without it. They glance backward to see that the coast is clear, suck out the last drops, and flick their foil to the road.

I’ve never felt the attraction that others feel toward these processed foods, so I called Jim Keene, co-owner of Santa Rosa’s Nor Cal Bike Sport and sister store the Bike Peddler to discuss. Keene says that energy gels represent advances in nutritional science that have helped lead to improved athletic performance since the 1980s, when he raced frequently and often relied for fuel on archaic products like bananas, grapes and water.

“A lot of racers just blew it back then, totally hit the wall if they didn’t eat right,” Keene remembers.

Today, by contrast, formulated nutrition (which I once innocently believed only the very young or very old needed) has reduced risk of anemia, muscle cramping and of long-distance riders burning into their own body tissues for energy.

But fresh air still blows through the high summits of cycling superstardom. Mountain biking superstar Gary Fisher prefers to eat “real food,” as he calls those things that don’t come in foil wrappers. Such items, he says, have delivered him from start to finish in uncounted races and rides since the 1960s. A meatloaf sandwich comes to mind as a favored road food, says Fisher.

“I don’t eat Gu or gel, because it’s just sugar and it’s not good for you,” he told me. “It’s like drinking Coca-Cola. You can find all the minerals and nutrients you need in real foods.”

And Fisher’s thoughts on those who litter the roads with their candy wrappers?

“Those guys are in way too big a hurry.”

Legend says that Geronimo could walk 40 miles through the scorching desert carrying a mouthful of water, spit it out at the end, and walk home. I’ve never tried that, but I did ride a double century (200-mile bike race) several years ago with a package of Clif Shot Energy Gel in my pocket, and I resisted all urge to eat it. Actually, there was no urge. Zero. I ate dried figs, bananas and nuts that day, and I did well.

I’ve since pedaled thousands of miles more, and the rejected package of goop still sits on my desk, testimony to its uselessness in a world of wonderful fruits, breads and beer. On the back of the package, instructions recommend that athletes eat a packet before exercise, two to three per hour during exercise and one within 30 minutes after exercise. Had I followed such guiding principles during my 218-mile ride, I would have eaten about two pounds of gel.

The cycling industry would like us to believe that factory-made goop is more convenient, sexier and generally better than real food. Many have bought into the scheme, yet in this world of carbon, Spandex and maltodextrin, a few Luddites still ride. Some of us even stop to make sandwiches.