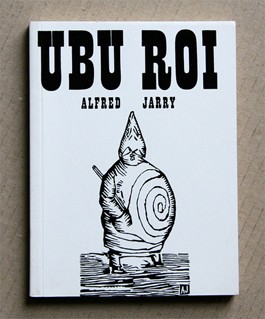 When the French satirist Alfred Jarry first presented Ubu Roi (“King Ubu”) in 1896, the play was reviled by critics, who called it vulgar, perverse, disgusting, subversive, scatological, sexual and disrespectful to royalty and the church. It was a hit among the masses, who appreciated Jarry’s low-comedy send-up of power and privilege. The offended bourgeoisie, however, demanded to know why such a play had ever been written. That “Why?” has followed Ubu for over a hundred years, and we have now posed it again to Brent Lindsay and Amy Pinto of Santa Rosa’s Imaginists Theater Collective, which this weekend opens its own new version of the play, here called Ubu Rex, in a multimedia extravaganza involving live animation, puppetry and the gratuitous use of bicycles.

“Why?” Lindsay laughs. “A really good question, one we keep asking ourselves. The answer shifts daily. Today, the answer is that by performing Ubu we’re exposing the evil power-hungry clown that is in all of us. The other reason is that it’s really, really funny.”

“We aren’t going to hide the scatology in the play,” Pinto adds. “The scatology is so in the spirit of the show! This production embraces the disgusting, funny figure of King Ubu and all the symbols of power and greed that he represents, and that live inside all of us.”

“Unchecked power can be found anywhere,” Lindsay says. “It can be found in the White House, in the offices of a newspaper or within an innovative little theater company working inside a tiny performance space in Santa Rosa. If you look for it, you’ll find the evil clown of power hiding everywhere. The more layers you pull back, the more exposed your own evil clown becomes.”

“By the way,” Pinto adds, “Alfred Jarry was really into bicycles, which he called ‘That which rolls.’ So everyone who rides their bike to our show will receive a free plaque for their bike with those same words. But back to the earlier point, our real answer to the ‘why’ question, though, is that Ubu, even after all these years, is a work of genius. In this play, Jarry created a jumping-off point that influenced generations of political theater troupes.”

Lindsay concludes, “We like to think theater can change people, change the world, that audiences will leave a little different when they walk or ride back to their lives. Anything can and should take place between these walls—and in this show, I think it probably will!”