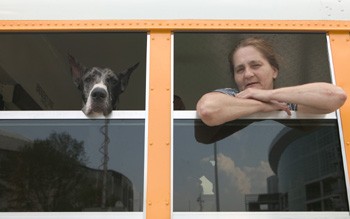 En Route: Captured by a FEMA photographer on her way to the Astrodome, this unknown woman had to stay behind when evacuation warnings were first given.

Being too poor to drive means no exit

The night before Hurricane Katrina hit, tens of thousands of people in New Orleans had one thing in common. It was not their race, although many were African American. And it was not that they were poor, or elderly or infirm–although many of them were all of these things.

What many of those people shared that night was this: they didn’t own a vehicle. They had no car, no truck, no SUV to point north or west, away from the storm and the flood waters. They had no “extra set of car keys” to tuck into their disaster supply kit, as recommended by the city’s “Emergency Preparedness Guide.” They had no gas tank to keep half-full at all times, a key evacuation-preparation step suggested by the Department of Homeland Security. In all, 77,462 households in the New Orleans metropolitan area lacked private transportation, according to the U.S. Census Bureau. Since the average household contains 2.6 people, approximately 200,000 people were without a vehicle and a way out of the imperiled area.

This was not a secret prior to Katrina’s landfall; it was widely reported in the local and national media. A full year earlier, in September 2004, New Orleans mayor Ray Nagin had explained at a press conference that he could not declare a mandatory evacuation of his city in advance of Hurricane Ivan because he had no way of evacuating people without cars.

New Orleans is hardly the only place in such a predicament. Nearly 11 million households in the United States lack vehicles, according to the Census Bureau–which means that approximately 28 million people have difficulty evacuating their area in the event of an emergency. These people might take comfort in the vague reassurances of official disaster plans, such as the single sentence addressing the problem in New Orleans’ “Emergency Preparedness Guide”: “Local transportation will be mobilized to assist persons who lack transportation.” But they shouldn’t. “The fact that in this country, we haven’t paid adequate attention to this issue,” says Havidan Rodriguez, director of the Disaster Research Center at the University of Delaware. “Most evacuation plans are based on the premise that people have transportation available to them–their private cars,” he explains. “We think very little about people who don’t have automobiles.”

Examples can be found everywhere. In hurricane-prone Miami-Dade County, for instance, 14 percent of households lack a vehicle, but the Office of Emergency Management website says only that “public transportation may be provided” to evacuate people without transportation. (Miami-Dade county officials did not return calls for comment.) Similarly, Florida’s Department of Emergency Management’s website, which has a chart walking people through the decision of whether they should stay put or evacuate in an emergency, advises citizens in either case to fill their cars with gas. No mention of what to do if you have no vehicle, as is the case for 8.1 percent of Florida households. In fact, the Federal Emergency Management Agency doesn’t even know many households in the nation’s capital have no car, as the Washington Post reported on Sept. 7, 2005. (The correct answer: 37 percent, according to Census stats easily accessible online.) Barbara Fockert, the natural-disaster planner in Minnesota (site of the devastating Red River floods of 1997), also did not know how many households in her state lacked a vehicle. (The answer is 7 percent.) She said she “really didn’t know, and couldn’t say,” whether any local governments in her state had prepared to evacuate people without a vehicle.

Even New York City, with its formidable public transit system, is considered by disaster-planning experts to be “unevacuable,” says Kathleen Tierney, director of the Natural Hazards Center, at the University of Colorado at Boulder. Since 56 percent of the city’s households do not have a vehicle, during an evacuation the city would devote “all mass transit” to getting people out of harm’s way, says Jarrod Bernstein, spokesperson for the city’s Office of Emergency Management. But it would take at least 17.5 hours to evacuate 1 million residents that way–and that’s if the electricity remains on, so that subways and trains are available for the fleeing throngs.

The 17.5-hour estimate comes from New York City’s plan to evacuate in the event of a strike from a Category Four hurricane–an event that would require one-eighth of the city’s population to relocate at least temporarily. The evacuation would need to start 24 to 36 hours ahead of the hurricane strike to get everyone out on time, says Bernstein. But the trouble is, “we’re not going to have 36 hours to prepare,” says Tierney. She points out that evacuation decisions are often delayed as officials weigh the cost of a false-alarm evacuation against the danger to the population.

And what about an incident that occurs with no notice? A dirty bomb or bioterrorism or a strike on a nuclear power plant? Or if you had to get more than a million people out? The city has plans to evacuate neighborhoods, but what if the entire population of 8 million, including the nearly 5 million without cars, had to evacuate? “It would be ‘bring on the body bags’,” says Tierney. “We don’t have a scenario where we would have to evacuate the entire city,” concedes Bernstein.

For its part, 26 percent of San Franciscans have no access to private vehicles.

Still, it is not impossible to save the lives of people who lack automobiles.

“A city manager or planner needs to go on [the census bureau’s] website, see where the vulnerable people are, and plan accordingly,” says the University of Delaware’s Rodriguez. But, he adds, “this is not done. People are not looking at these types of data, and the organizations that are responsible for disaster preparedness and response are doing last-minute actions and initiatives,” he says.

To encourage better planning, FEMA launched a pilot program in 1997 called Project Impact which provided funding for communities to, among other things, assess their vulnerable populations and make arrangements to get people without transportation to safety. The program had reached 250 communities and proved quite effective, says Tierney. However, the Bush administration ended the program in 2001, and funds once earmarked for disaster preparation have been shifted away.

One of the most haunting images from New Orleans was a widely published photograph of about a hundred school buses, submerged to their rooftops in water. The picture was meant to show how high the floodwaters had reached in the city, but to Rodriguez, it’s a vivid portrait of an opportunity missed. “Those buses were not used for evacuation. Why? We have to stop thinking only about the people who can move out of areas like this on their own,” he says. If we don’t, then in the next New Orleans–style catastrophe, tens or hundreds of thousands will again be left behind–and many will needlessly die.