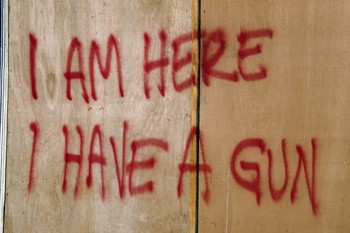 The Iconography of Hell and Our Guilt

Each day has its own pictures:
bumper to bumper traffic two states long
a frenzied mob in a domed prison
rising water
the hungry pushing carts out of looted stores
rooftops in a lake as vast as the eye can see
dead city silent city
the survivors the tribes
stadiums filled with refugees
helicopters over a dead unlit city
a ragged parade of decadents spitting defiance
television cameras as numerous as marchers
a can of tuna and a strand of beads
take that you former shithead king
dead pets rotting away behind locked doors
the smell of putrefaction visible
muck darkness heat an eviscerated pigeon
two dogs shot by a hired executioner
a sea of horrible stories rising like swamp fever
from the foul mouths of dear ones from exile
11TH DAY OF HELL!
We are all working in this pit of sorrow to unfreeze time.

I think what people in other cities find hard to understand is just how much New Orleanians love their city. I’m not saying that folks in Houston or Cleveland don’t love their cities. I know it for a fact that my friend Marty loves living in Shaker Heights, which is in Cleveland. New Orleans is different, I think, if only because the locals have had a long time to elaborate a style of living and a modus vivendi that couldn’t be mistaken for anything else.

Everybody in New Orleans loves the food, the music and our sense of time (slow time) that’s peculiar to us and to us only. There is a velvety sensuality here at the mouth of the Mississippi that you won’t find anywhere else. Tell me what the air feels like at 3am on a Thursday night in late August in Shaker Heights, and I bet that you won’t be able to say, because nobody stays up that late. But in New Orleans, I’ll tell you, it’s like ink and honey passed through silver moonlight. Accuse me of poetry, go ahead. But prove that it isn’t so. You can’t, because New Orleans is made of a tissue of poetries that wove each other together over time.

Take food, for instance, and what they think New Orleans food is in New York or in Seattle, and whatever it is they think it is has already come back to New Orleans and been absorbed into our food. In other words, New Orleans is itself but also all the reflections of what others project onto us.

The same goes for the music and all the places the music made world-famous. What is the House of the Rising Sun? Or where was it? Listen to the mule carriage drivers that used to go past my house ferrying tourists from one fairy tale to another and you won’t know what that Rising Sun house is, or how it’s spelled or what street it was on. But after you leave and return to your home, which is not in New Orleans, you will be certain that you, and only you, know the secret location and nature of it, and maybe you even feel that you’ve been there. New Orleans is an essence, something that if bottled would be so pungent you’d think that a perfumed boil on the Devil’s forehead burst open.

That’s how we are, but right now we feel every feeling, anger and sadness, sorrow and terror, and guilt. Especially guilt. The same sweet laissez faire that makes our life so enjoyable may be at the root of that civic complacency that turned a blind eye on corruption and gave no thought to tomorrow.

Louisiana isn’t called “the dream state” for nothing: Katrina found us dreaming. If our voluptuaries were on guard, we might have saved the city. We could have been preparing for this for all the years that we knew it was going to happen. New Orleans should have been reengineered since the flood of 1927. Instead, like the citizens of Pompeii, we made libations to the gods of chaos. Carpe diem! Our politicians, like our citizens, lived in the moment, a beautiful, fragrant, delicious, sexy moment. The hard work? Manaña.

And yet, our guilt should be no greater than that of the country as a whole. We all live in the moment, in a consumer stupor that ignores and denies tomorrow. All of the U.S. is the land of shopping-mall, credit-card dreamy dreams, beginning with our capo, GW, and his imperial guard. His Homeland Security turned out to be a fairy tale. This administration’s answer to everything is: throw money at it. Whose money, pray?

Tomorrow’s money may not matter to us, but tomorrow is where our children live. For us, Americans of today, “horrible” can last only three days, max. Any longer and a terrible depression sets in, unrelieved by the drone of the media or the apportioning of blame or the inevitable investigations. But we are in for it now.