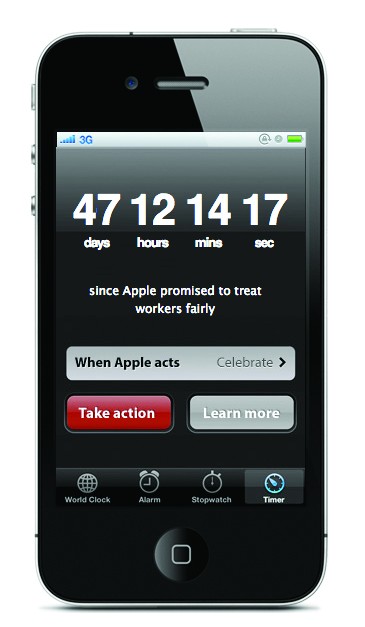 Sorry, there's no app for conscience

Every smartphone user needs to visit the website Ethical iPhone, a gadfly to the conscience of Apple and the rest of the electronics business world. On the site’s homepage is a larger-than-life iPhone with an app you’ve probably not seen before; it simply clocks the days, hours, minutes and seconds that have passed since Apple promised to improve the working conditions for its Chinese factory workers—those who have lost colleagues in work-related suicidal leaps from the upper floors of the factory.

Click on the video and watch Apple’s corporate heads (wealthy, attractive, clean and relaxed in the filming studio) discussing the “amazing” qualities of the iPhone and iPad, then cut to footage of Chinese workers (poor, unseemly, bloody and dead on the sidewalk). Amazing how insignificant the engineering genius of the iPad when juxtaposed with the engineering of a cheap labor deal.

Workers report that their training includes this mantra: “Heart to heart, Foxconn and I grow together.” Foxconn runs the show for Apple in China, and their purported business philosophy includes “devotion to greater social harmony and higher ethical standards,” boasting a “win-win model for all stakeholders including shareholders, employees, community and management” while striving to “make the world a better place for all.”

This human-ethics website provides two radically different depictions of working conditions for Foxconn electronics workers. The first is a building under construction where conditions are substandard in every way and include crowding, construction dust and inadequate lighting, with no footage permitted that shows how bad it might be inside the structure.

The second is both interior and exterior shots of a lovely completed factory where all the workers are wearing protective clothing on their 12-hour shifts. The shots of many of them sleeping on their lunch hour (it’s “not exhaustion,” we’re told) is explained away as an old Chinese custom. On this factory’s exterior, at the recommendation of “psychological experts” hired by the corporation, Foxconn has installed suicide nets.

Why? The experts predicted the nets would make unhappy workers “think twice” before attempting suicide.