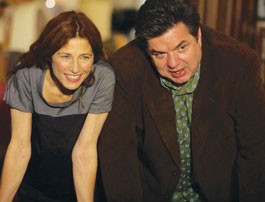 Compassion fatigue sets in soon in Nicole Holofcener's 'Please Give'

It can be argued that Nicole Holofcener discovered Catherine Keener. After her 1996 indie film Walking and Talking, it was clear that Keener wouldn’t merely be used for her capacity for tragedy. Holofcener discerned the sardonic qualities behind Keener’s essentially sad, drawn face. The partnership continues in the occasionally funny Please Give.

Here, Keener has an against-type role as a bleeding heart in Manhattan. Kate (Keener) is the propertied owner of a boutique, making scads of money reselling furniture she bought cheap at estate sales. She tangles with her adolescent daughter, Abby (Sarah Steele), and suffers through her guilt at, essentially, making money from other people’s deaths. She also has a tenant, Andra (Ann Morgan Guilbert), an exasperating old lady whose apartment Kate is planning to annex as soon as the crone dies.

Holofcener hasn’t developed much as a visual filmmaker in the past 15 years; she still favors the walking and talking shot, for instance. And visual humor is a little beyond her, though she tries, as in a gag of a lover’s face in mid-sex panting next to a statue of Buddha or in the vintage slapstick of a man dropping a valuable vase. She leaves you with the words, and words are runners-up in The New Yorker cartoon-caption contest, though these can hit the mark at times. In one line, for instance, a spuriously valuable piece is said to date from “the antique era.”

Please Give spirals out to include Andra’s toxically grandparented offspring: one named Rebecca (Rebecca Hall), a dog-walking pal to the angry Abby; and Rebecca’s sister, Mary (Amanda Peet), who supplies a romantic interest to Kate’s distracted husband. The doughy husband (Oliver Platt) is drawn by Mary’s refreshing curtness. So are we. Since there isn’t a traditional Catherine Keener character in this comedy, we’re more taken with her surrogate, in the form of Peet’s ruthless energy. In a movie, as in a sporting competition, we’re drawn to the player who wants it more.