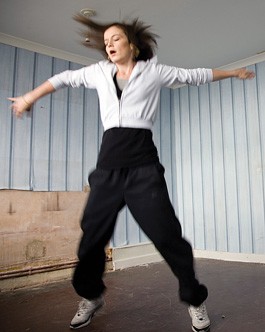 Filled with tension, 'Fish Tank' is one hard party

While Fish Tank is a film about the kind of people who name their dog after a brand of lager, there isn’t an ounce of patronization in it. Director Andrea Arnold’s film is the furthest thing from a slumming expedition, though it concerns the illicit romance between an adult and Mia (Katie Jarvis), a 15-year-old girl living in a housing estate in the east coast of England.

According to the BBC, Fish Tank‘s location, the Mardyke Estate—a set of concrete towers surrounded by post-industrial wasteland—is the most notorious housing development in its 43-square-mile area. Arnold (Red Road) isn’t glomming on the gritty squalor with her frequent collaborator, photographer Robbie Ryan. The landscapes are bathed in sea light; titanic rain clouds march in. In repeated spins, Bobby Womack’s version of “California Dreamin'” comes in like the original version did in Chungking Express, adding forlorn romance and lyricism to the views.

In the last third, when Mia starts to make an escape, we can see past Essex’s rubbish heaps, junkyards and tired-looking houses into something wild—particularly at the plot’s climax at the Thames estuary, where the land ends as abruptly as if it had been chewed away by a steam shovel.

Mia is falling off the edge herself. A small, thin girl at odds with everyone, she’s a drop-out and a delinquent, and the special-ed school gates are gaping wide for her. She’s scarcely tolerated at home by her lounging mother, Joanne (Kierston Wareing). Her little sister Tyler (Rebecca Griffiths) isn’t a fan either, and Mia is always ready to have it out with the pack of teenage girls who roam the housing project’s corridor. Mia’s therapy for the stress is dancing, practicing until she’s breathless in her hideout, the living room of an abandoned flat in this concrete tower.

Her mother has just made a real find: Connor (Michael Fassbender), a man with a job. We know this because Mia finds a pay stub when she helps herself to a fiver out of his wallet. He can do things, like snatch fish out of a pond with his bare hands. And the bedroom action between him and Mia’s mother is working out, as we see when Mia peeks through her mother’s bedroom doorway. But the walls in Mia’s flat aren’t thick enough. The boundaries get broken fast, and Mia starts to draw Connor’s attention.

Only a female director would know how to chart the mixed emotions behind such a flirtation or know how to make the sexual tension erotic instead of creepy, or to be able to make it clear what a young girl like Mia might think she wanted, while really not knowing what she might get. Even though Mia narrowly escapes being raped by a pair of boys early on in the film, Arnold isn’t after the males in the movie. Of course Mia’s gone wrong, but there’s nothing delicate in this film’s world. Mia’s mother is as negligent as an animal, and yet she’s a beautiful blonde creature, true to her own nature.

The Lolita-like shot of Connor tending Mia’s wounded, unwashed foot is a reminder of what made that novel work as a story of power gone haywire. When Mia avenges herself, she’s a brutal child acting out, but the justice of what she’s doing is apparent. Arnold is a fiendishly persuasive director, and she makes you see things from Mia’s view. The river’s mouth finale is where this little film gets big: it’s like the end of a Romantic novel when the elements are brought in to witness the emotional states of the characters on a windy fen or the banks of churning water.

Katie Jarvis was a nonprofessional picked off a railway platform by Arnold, and she’s chillingly good. She’s not a phenomenally talented dancer (she had to be trained for the part), and I liked the way Fish Tank denied the usual stuff about the slum girl making it big as a dancer. Stripping away that movie myth, Arnold expresses something better: the raw hedonism and willfulness that makes a poor life bearable. It’s rare when a director who is so sensitive, who has such a sure eye and ear, can understand the bliss of a hard party.