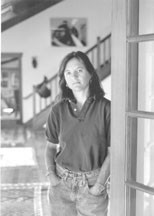 Far away, so close: Though she writes about the interactions between Africans and Westerners, these days author Eileen Drew makes her home in the hills above Sebastapol.

PEOPLE SURE SEEM to love pigment-deprived reptiles. White gator Antoine Le Blanc packed ’em in at San Francisco’s Academy of Science exhibit. Kevin Spacey’s Albino Alligator is one of the most eagerly anticipated films of the fall season. And now Sebastopol author Eileen Drew’s new novel, Ivory Crocodile (Minneapolis: Coffee House Press, 1966; $21.95), is wowing readers across the nation, getting a heavy promotional push from mega-chain Barnes & Noble, and prompting book critics to muse on the mythological significance of the title.

“In the African legend of the ivory crocodile,” wrote the critic for Kinesis in a glowing review, “the white crocodile is prized for its skin color, but is in fact the deadliest reptile of all.”

Oooh, scary. Only one problem. According to Drew, there is no African legend of an ivory crocodile. “I don’t know where the writer got that from,” Drew says bemusedly. “There’s no such legend that I’ve heard of, and it’s not anywhere in the book.”

In an inadvertent way, though, the reviewer did strike an important chord of Drew’s novel. Like her acclaimed 1989 collection of short stories Blue Taxis, Ivory Crocodile takes as its theme the messy, awkward interactions between Westerners and locals in the various nations of west Africa. In writing these tales, Drew was able to draw on her own background as the child of an American diplomat in Nigeria, Guinea, and Ghana, then later as a Peace Corps worker in Zaïre.

So was Drew consciously hunting and gathering fiction material even while living in Africa? “I suppose I did,” she replies. “I kept a journal while I was in Zaïre, so while I wasn’t able to write fiction while I was there, I did go back and use material from my journals when writing stories.”

Indeed, astute readers will recognize more than a touch of the real-life Zaïre (run for the past 31 years as a virtual kleptocracy by the brutal President Mobutu) in Ivory Crocodile‘s fictional setting of Tambala, complete with its corrupt, CIA-backed president and intrigue-filled frontier with Marxist Angola. Drew explains that setting the story in a fictional nation was a boon from a creative standpoint. “It wasn’t that I was trying to hide it, but fictionalizing things gave me a lot of creative freedom,” she says. “I didn’t have to get every custom of every tribe right, and I could use the building of a bridge into Angola as a plot point, when in fact, that never happened.”

Aside from the challenge of fictionalizing a very real setting, Drew also wrote with the full knowledge of those literary titans who had trod the ground before her. Anyone dipping their toe into the Westerner-in-the-Third-World genre is bound to be compared to the likes of Graham Greene and Joseph Conrad, both daunting acts to follow. “They’re my favorite writers–Conrad, especially,” says Drew. “But they weren’t intimidating, because they were writing about a different world than I was–the world of colonialism.”

And speaking of pith-helmeted European empire-builders, it seemed inevitable that despite their obvious differences, book reviewers would seek to link Drew to the grande dame of faded imperial glory herself, Isak Dinesen. “She’s another writer I love,” Drew says charitably, “although she’s a real colonialist, and that paternalist attitude comes out in her writing. Again, she wrote about a very different Africa than the one I did.”

Not that the critics seemed to care. After all, Dinesen was a white woman like Drew, writing about Africa. What are 50 years and 2,000 miles’ difference–particularly in light of memories of Meryl Streep and Robert Redford prancing through the veldt in that extended Ralph Lauren commercial Out of Africa–when readers might actually recognize Dinesen’s name? “There are other writers who are closer to me,” acknowledges Drew, “but she’s a bigger name, so it’s easier for a critic to pull her out of a hat.”

Much closer to Drew’s own work is Anglo-Indian (by way of Trinidad) author V. S. Naipaul, who cast a rather jaded eye upon idealistic Westerners blundering about through developing countries in such novels as Guerrillas. “Naipaul also wrote about Zaïre in A Bend in the River,” Drew says, “and that was a bit intimidating, because he wrote about a Zaïre that’s much closer to my own.”

But whatever the intimidation factor, Drew says she does take her literary predecessors into account while writing about her own, decidedly post-colonialist Africa: “I think about them a lot, and how their Westerners approached the situations they were in.”

The situations in Ivory Crocodile tend to revolve around power and cultural difference, especially the contrast in women’s roles between the America of Drew’s narrator and the tribal culture she finds herself in. Refreshingly absent are the usual nature documentary clichés of lions, cheetahs, and zebras that figure so prominently in most Western views of Africa. “I didn’t go to Africa for the wildlife,” Drew says. “I went for the people. Their lives and culture are what I find interesting and wanted to write about.”

Sitting in her comfy writing room on a typically chilly west Sonoma County morning, this particular Westerner couldn’t be farther from the humid forests and wide alluvial plains that inspired her earlier work. And for now, Drew is content to leave Africa behind as she looks closer to home for inspiration in writing her next book of stories. “I’m less interested in African material than California material now,” Drew says. “But I couldn’t really get out of Africa until I finished that book.”