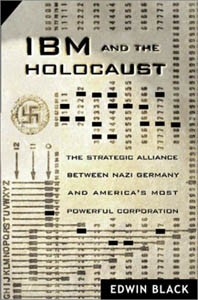 An American company stands accused in ‘IBM and the Holocaust’

A friend of mine is fond of telling the story of a car trip he took as a boy with his friend’s grandparents, who were Holocaust survivors. As they passed a Ford on the road, the elderly man and woman began cursing the vehicle. When he asked why, he was told of Henry Ford’s anti-Semitism, Nazi sympathies, and alleged Nazi collaboration. Now, Edwin Black argues that another American business giant is deserving of similar infamy in his new book, IBM and the Holocaust (Crown Publishers, $27.50).

Black is the son of Polish Holocaust survivors. He is also the author of The Transfer Agreement, which examines a 1930s scheme between German Zionists and the Nazi regime under which the Zionists helped to lessen the impact of the international boycott of German goods in exchange for the Germans allowing some Jews to emigrate to Palestine.

According to Black’s new book, IBM supplied Hollerith punch-card readers and related technology to the German government, which used the technology to conduct censuses, organize their rail system, organize and bill for slave labor, and coordinate the rounding up of Jews and other victims for shipment to concentration camps.

Without this technology, Black argues, the Holocaust could not have proceeded on as grand a scale, and the roundup of victims could not have been accomplished as quickly or efficiently. And, he argues, without the cooperation of IBM and IBM’s chairman, Thomas J. Watson, the Germans would not have had the machines in sufficient quantities to make them effective.

IBM’s direct involvement with the German government was conducted mainly through its German subsidiary, Dehomag, and Watson had little or no control over the company once war broke out in Europe. However, in the years before the war Watson expanded Dehomag, authorized its managers to develop and expand production facilities in Germany, and positioned them to work closely with the virulently anti-Semitic German government.

None of this was illegal, and Watson had a wide following of international businessmen who also favored increased rather than decreased economic interaction with the Third Reich–a form of constructive engagement similar to President Reagan’s strategy with apartheid South Africa.

However, Black argues, Watson should have been aware and probably was aware that the work Dehomag was undertaking was being done for purpose of identifying Jews in Germany. He also points out that by 1933, when Dehomag first undertook a census for Germany, the extreme anti-Semitic nature of Hitler’s beliefs and programs was public knowledge.

IBM NY essentially lost control of Dehomag in 1940, when Watson was compelled to appoint a Nazi majority to the board of directors. But according to Black, Watson maintained careful surveillance of the company through IBM’s Geneva subsidiary, which continued economic relations with Dehomag throughout the war.

IBM NY did maintain a greater degree of involvement with and control over its subsidiaries in countries occupied by Germany. For instance, Watson personally approved the construction of manufacturing plants in Vichy France and Nazi-occupied France in 1941.

Black also claims that “Millions of punch cards were routinely shipped from IBM in America directly to Nazi-controlled sources in Poland, France, Bulgaria and Belgium.” This information was revealed in a Justice Department investigation of IBM for trading with the enemy. The investigation was eventually dropped, although Black maintains that this was in part because of Watson’s close ties to President Roosevelt and in part because the U.S. government was dependent on IBM equipment and technology for the prosecution of the war.

This book has its flaws. Black tends to overwrite and has included a fair amount of extraneous material. More importantly, it would have been helpful if the book had made some attempt to provide context for IBM’s decision to continue close relations with its subsidiaries. Were there other subsidiaries of American companies that were deemed vital to the German war effort? If so, how did their parent companies handle the situation? Were there similarly situated companies who refused to cooperate with the Nazis? If so, what were their rationales and the effects of their decisions?

It is also unclear what would have happened if the Germans had not had IBM technology and equipment at their disposal. In Rwanda not long ago, nearly a million people were massacred with hoes and similar tools, so probably some version of the Holocaust would have taken place regardless of the sophistication of available technology. It is clear, however, that the technology was deemed highly valuable by the Germans themselves, and was widely used by other countries to conduct censuses and organize information and resources.

Black does establish that IBM benefited tremendously from its subsidiaries’ relationships with the Nazis, both in terms of actual profits during the war years and in terms of the competitive advantage that it derived from being firmly entrenched in newly liberated Europe. Clearly, Watson and his aides acted in the best interests of their company. Black’s book, together with a recently filed lawsuit against IBM, will help clarify the effects of their actions on their species.

Web extra to the March 1-8, 2001 issue of the Northern California Bohemian.