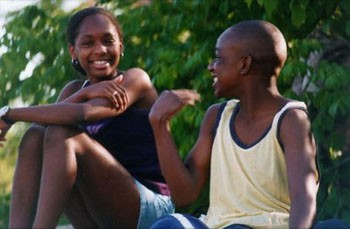 GEORGE Washington was the first president of the United States. This is the first fact David Gordon Green learned. Before he knew his ABCs, before he could tell time, the nascent director absorbed the legend of our nation’s founding father.

So it’s no wonder that George Washington serves as the title of the 25-year-old Green’s stunning feature film debut, a haunting picture whose naturalistic performances, astounding cinematography, and rejection of plot structure place it in the company of classics like Terence Malick’s Days of Heaven. Throw in a Cassavettes-like use of the face as a narrative tableau and you have a piece of art that alternately thrills and frustrates–a hallmark of independent film spirit.

“George always knew he’d be a hero,” says Nasia (played by Candace Evanofski), the film’s preternaturally wise narrator. George (Donald Holden) is her new boyfriend. He’s a dreamer–and in the decrepit North Carolina town these kids inhabit, that in itself is an act of bravery.

At 12, the tough-yet-tender Nasia doesn’t know much, but she knows two things for sure. She knows a good catch when she sees one–and she knows she wants to get pregnant. Why? Because no man will ever love her as much as a child will.

This blend of innocence and cynicism is typical of George Washington, which takes a fly-on-the-wall approach as it observes a group of dirt-poor kids stranded in a decaying town.

The film opens in the midst of a seemingly endless summer. Nasia has just dumped Buddy (Curtis Cotton III) for George. In this little group that’s big news. Without distractions like trips to the mall and summer camp, these kids find excitement where they can. Mostly that means just sitting around talking. Their often-improvised musings are the backbone of the film. One kid talks of escaping to another planet, while another wants to be president. Emotions are discussed in earnest because defense mechanisms are still undeveloped. Green’s documentary background and use of non-actors give these scenes true authenticity.

Then, without warning, a freak accident occurs. Everything changes. Suddenly what passes for childhood in this desolate backwater comes to an end. George, already rendered an outsider by the helmet he must wear to protect his underdeveloped cranium, is the most deeply affected. He rebels by taking extraordinary risks and becomes his own version of the TV superheroes every kid is weaned on.

If George Washington is about anything, it’s about growing up into an adolescence that has no discernible end. By the close of the film, these kids are not children, but they’re only one step along the path to adulthood. In the absence of parenting, it’s a self-guided journey–leaving us to wonder: How on earth will they get there?