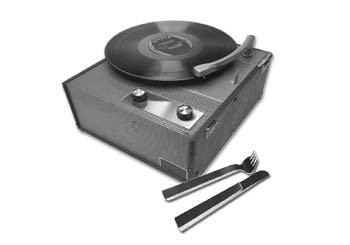 In which our wayward reporter eats an entire record album. Well, OK–it’s just a 7-inch.

When I was a kid, I collected role models by rifling through the Guinness Book of World Records. My favorite section of the book reported the more ridiculous, off-the-wall records: the most cigarettes smoked at once, the longest bout with hiccups, that sort of thing.

In particular, I was intrigued by Michel Lotito, the French guy who ate an entire airplane by grinding it up into a fine metal powder and sprinkling just a little bit on his toast every morning over a two-year span. The whole thing seemed so admirable to me: the patience, the dedication and–coolest of all–the ability to boast that you once ate an entire airplane.

Undertaking such a task has always been a dream of mine, but it was impossible until about a year ago, when I finally adopted a semidependable routine. Married, a homeowner, employed–I realized that for the first time in my life, I was finally in the right position to start eating something not normally found on a plate, a little bit at a time.

But what to eat? Certainly, I didn’t want to grind up an entire airplane. After all, that had already been done. I consulted with friends, gave it deep thought and tried to pick just the right thing, something that I felt close to. It was a lot like picking out my first tattoo.

My love affair with records is no secret. I have worked at a record store for over 10 years. I listen to records at home constantly, and at the time, I was even getting my own band’s album pressed. Of course! Eating a record was the next logical step.

I put the word out last April that if someone was willing to donate a copy of Superchunk’s 1993 7-inch release “On the Mouth,” I would eat that. I even made flyers. To my surprise, it wasn’t long before someone came forward and obligingly, if with a puzzled expression, handed over my future breakfast for the next year.

But why Superchunk? It isn’t the most kick-ass record in the world, I know. But I used to have it a long time ago and I lost it, and there’s nothing like losing a record to make you want it again all the more. Eating it just seems like the best way to get it back–you know, for good.

You may be unsurprised to learn that reducing a record album into an edible powder is tricky. For example, The Joy of Cooking–my copy, at least–has no advice on proper vinyl preparation. I tried a cheese grater, but the record was too tough. I borrowed a metal file and tried to dust it down, to no avail. Turning back to cooking implements, the food-processing attachment on my blender finally did the trick.

I snapped the album into small triangular pieces and placed them in the food processor. I turned it on, and the thing made a loud goddamn racket, but after a few minutes, the job was done. My record was ground up into about a half cup of a granular, black powder.

The original plan was to drop a pinch of the powder into my coffee every morning. What routinely happened, however, was that the record granules sunk to the bottom of the cup, much like coarse coffee grounds sometimes do. Trust me, this is not a good way to start the day.

Experimenting, I started sprinkling a bit of record powder on my peanut butter and jelly sandwich every day. This, too, proved to be uncomfortable, since the record granules wouldn’t crumble when bitten into. It was like having gravel in my sandwich, and I had to chew lightly to avoid hurting my teeth.

What I settled upon after a week was simply taking my vinyl neat; that is, throwing back a small spoonful with a chaser of water. Even though some of the paper shavings from the record’s label occasionally got caught in my throat, it was the quickest and easiest way to get the stuff down.

About this time, I started to wonder about my digestive system, so I called my doctor at his home. It was 10:30pm, and I can’t say he was exactly amused. Incredulous, he asked me if I knew what records are made of.

I explained to him that the vinyl polymer from which records are manufactured is made from a petroleum and chlorine process that forms an ethylene dichloride compound. I asked if there are any risks in consuming these ingredients.

I asked if there was any risk of intestinal build-up or stomach injury. “I’m guessing that most of the record would pass right through,” he said. “What I’d worry about is what sort of chemicals they use on records, if there’s any preservatives they spray into the grooves that may be soluble and that might get into your system.”

Soluble, schmoluble, that was good enough for me. I figured I could continue my project with no worries. And so it went for the rest of the year, though I gradually became less vigilant in my consumption. I occasionally downed a spoonful of record powder, sometimes once a week, sometimes less. In the final stretch, when there was only a little bit left, I began to feel a pang of regret, like I hadn’t really completed the project correctly by just eating the record straight, so I started mixing it into my food again.

Still, there was the problem of the powder being too chunky. It was incredibly distracting to have hard chunks floating around in my mouth. I wondered if Michel had these problems with his plane.

I pulled out a mortar and pestle in an attempt to grind the granules down to a fine, inoffensive dust. Hard as I tried, it just didn’t work very well, and little specks of record kept flying out onto the floor. I picked each of them up and thought about which little part of the song they were responsible for reproducing in their former life as part of a record. I couldn’t risk losing any of them, that’s for sure.

One night, I stirred a bit of the powder into my corned beef hash, but it mostly melted and stuck to the skillet. I had a hell of a time scrubbing it off and eating it. However, I was on to something; namely, the notion that the chunky granules would melt if I cooked them, making the powder easier to eat.

It was then that I made the regrettable decision to bake a quiche.

My quiche contained spinach, onions, cherry tomatoes, tempeh strips, Gruyère cheese and, of course, album powder. When I grated some nutmeg into the custard mixture, I confidently thought, “This will mask the taste of baked vinyl.” But when, after adding all the traditionally edible ingredients, I added a teaspoon of black powder and watched myself stir it into the eggs, it hit me that I had just ruined a perfectly fine quiche.

Indeed, the finished pie was incredibly disgusting. Baking the record powder may have melted the granules, but it also finally brought out its pungent flavor. I can tell you this: baked, ground-up, 12-year-old vinyl tastes like an old, rusty downspout. It destroyed the entire dish. It even stunk the kitchen up pretty bad.

But the really lame thing was that I had to keep my promise to myself and eat the entire thing, which took a couple of long days, each serving met with dwindling enthusiasm.

As the year neared its end, my stash of vinyl gratefully diminished. Faced with my final teaspoon of record powder, I figured it was time to celebrate. What better place to commemorate the completion of my record-busting record-eating than at my favorite breakfast spot? With a gleam in my eye and a skip in my step, I brought my small bag of powder into Marvell’s Cafe and ordered up a stack of pancakes.

I can confidently report that there is nothing like maple syrup to hide the taste of record dust, and after I cleaned my plate and took my final bite, I felt like a new man.

Eating a record was an adventure, but it’s not over yet. I still have to consume the cardboard record sleeve. Which, of course, is dessert.

As a final note, the band I play in was rehearsing the night of my triumphant pancake finale. On a whim, we decided to cover the Superchunk track I had just consumed. Trouble was, we needed to listen to the song.

“Any one got a copy?” I asked. They all shrugged.