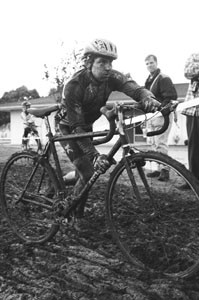 Fun in the Mud

For a North Bay resident, seeing cyclists of all types on the roads and trails is the norm. From commuters with pegged pants and panniers on their way to work, to skinny spandex-clad racers whizzing by on their weekend training rides, cyclists are all over. In recent years (especially since that brash Texan keeps winning the biggest race in the world), bike racing has become more and more a part of the common vernacular. Today almost anyone might be able to tell you what a peloton is and how clipless pedals are used. Mountain biking, a sport that has been embraced by the masses since it was born on Mt. Tam in the 1980s, is also a well-known niche in the cycling world. Fewer people are familiar with track racing (where riders on gearless, brakeless bikes zoom powerfully around a velodrome), and even fewer are aware of the red-headed stepchild of the bike-racing world: cyclocross.

Without having witnessed or, better yet, participated in this initially strange-seeming sport, one that resembles nothing so much as a muddy ballet, you might wonder why in the world folks would want to subject themselves to a heap of abject misery and anaerobic suffering, taking a perfectly good (and most likely highly expensive) custom bicycle and running around in the mud with it on their shoulders. Sound confusing? That’s what cyclocross is all about.

Cyclocross (often referred to as simply “‘cross”) originated in Europe as a way for road racers to stay fit during their off-season. Nasty weather is no deterrent for cyclocross racers; the more foul and messy the conditions, the more fun they seem to have. On rainy days, happy bike racers sport wild, muddy-toothed grins, crossing the finish line exhilarated and sopping. Cyclocross courses are designed to force athletes to dismount their bikes multiple times during the race.

Courses will almost always include both paved and dirt surfaces, as well as barriers–16-inch or higher wooden boards that racers approach at full speed before leaping off their bikes, sprinting over and flying onto their bikes again while losing as little momentum as possible–and run-ups, short steep sections (usually of slippery mud or crumbling sand) that racers must dismount for and run up while carrying their bikes on their shoulders.

Really good courses might include sand pits or beach-running sections, knee-deep mud bogs and giant off-camber turns around knobby-rooted trees. The racer who completes the most laps (usually one to two miles long) in the allotted time period (30 to 60 minutes) wins the race. Because races are comparatively short (road cyclists may race for six hours, while a ‘cross race will never be longer than an hour), racers lay everything out on the table and go incredibly hard and incredibly fast.

While races can be done on a mountain bike, most serious ‘crossers race specialized bikes, which look and function similarly to road bikes. Cyclocross bikes sport dropped handlebars and lightweight frames like road bikes, but have the mountain bike addition of knobby tires for better traction and cantilever brakes, which are less susceptible to mud-clogging.

“There aren’t many places in the U.S. that match [the Bay Area’s] intensity and enthusiasm for cyclocross racing,” documentary filmmaker Brian Vernor says enthusiastically. “The community here is tightly bound together, and evidence of that is the great quantity of races happening in a relatively small area.”

Vernor, whose film Pure Sweet Hell is causing a rage of devotion among ‘crossers, has been racing since he was a teenager.

“Sometimes we do the stupidest things and somehow convince ourselves we’re better for it,” he continues. “While racing ‘cross, the rider is on display. There’s social pressure, and fear of humiliation. I guess I like how when a racer cracks, everybody sees it. Even if that racer is me.”

Meadow Ride: While cyclocross is huge on the Central Coast and in Southern California, the Bay Area has been slower to embrace the sport. Here, however, some riders prepare to ‘cross in Golden Gate Park.

Many people involved in the ‘cross scene love the sport for its juxtaposition of beauty and ugliness: the speed, grace and technique involved in keeping your momentum as high as possible while maneuvering over an hour-long obstacle course is married to the anaerobic suffering, mud, wind, rain, crashes and humiliation.

Cameron Falconer of Fairfax, a 10-year elite racing veteran, believes technique is the most important aspect of racing at the top level. “Technique is significantly more important in ‘cross than any other kind of racing,” he says. “There’s a different physicality of it, getting on and off the bike like that. The better you polish your skills, the faster you’re going to go. It’s a heap of aerobic suffering, yes, but it’s not just about who can pedal harder or who handles their bike better. It’s gauging sections and knowing if it’s going to be faster to ride or faster to run, and then transitioning into that form. The skill set is very specific, and it takes a long time to get good at it.”

In a sport that lends itself so well to an intellectual approach–keeping upright and smooth while leaping on and off the bike over muddy, wet obstacles and trying to go faster than everyone else requires a bit of thought–a racer’s headspace is integral to her or his success.

While cyclocross is still a specialized niche within the niche sport of cycling, it is growing in popularity in the Bay Area. There are several race series that are quite nearly local. The Pilarcitos race series takes place in San Francisco and surrounding area, while the central coast series in the Santa Cruz area is a great grassroots series. And this year, two racers from a women’s-only team out of Monterey, the Velo Bella, were selected to race on the U.S. national team at the Cyclocross World Championships in St. Wendel, Germany, Jan. 29-30. With the season just ending, it’s too late this year to grab a bike and join in the racing, but it’s not too late roll around in the mud in anticipation of next September!

For more information on the cyclecross phenomenon, go to www.ncnca.org/cyclocross or www.cyclocrossworld.com. We’ll print a heads-up when ‘Pure Sweet Hell’ finally screens here.