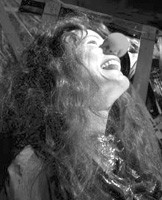 Elizabeth Fuller's one-woman show, a poem in the guise of a play

‘I dreamed I looked in the mirror and saw a clown,” says Elizabeth Fuller in the opening moments of her new solo show, Dream House. “Didn’t look like me,” she adds. “It looked like my sister, but I don’t have a sister, so this was a complication.”

She goes on to explain that she doesn’t normally have dreams like this one, the one being acted out onstage in a big PVC-framed box in front of an audience she addresses as “Creatures from outer space!”

Under normal circumstances, she dreams about “normal stuff”: people she cares about, flowers, parties, “hideous monsters” and showing up naked for algebra class. In this case, however, she is dreaming about building a new body with the help of her inner “sisters,” each named Elizabeth but occupying a different archetypal role: the clown, the developer, the plumber, the dreamer, the inspector, the gambler and the slut. Appropriately, each has a different approach to what her real-life “dream”–as in ultimate, optimum, preferred or longed for existence–should look like.

The show, co-written and directed by Fuller and her longtime collaborator and partner Conrad Bishop, is not easy theater; it is conspicuously nonlinear, nonlogical and occasionally nonsensical in keeping with the whole dream theme. It is also quietly and emotionally explosive, and frequently quite challenging, if for no other reason than for the thickness and richness of all that language, which unfolds in a warm, thick blanket of the world’s meatiest words.

Fuller and Bishop are the whirlwind of creativity behind Sebastopol’s Independent Eye theater company. Over the last several months, while dropping tantalizing hints about this project, they have been writing and directing original plays in collaboration with other companies (Drake’s Drum with the Sonoma County Rep; Ragnarok with Berkeley’s Shotgun Players; Long Shadow with Nevada City’s Foothill Theatre). The two have been at work on Dream House, a highly experimental performance piece in which Fuller builds a stylized house onstage as she portrays various aspects of her own personality and marshals her inner forces to create a new heart, mind and soul in which to live.

After a three-week run in San Francisco that ended at Thanksgiving, Fuller and Bishop’s specific brand of poetic, free-associative dream theater has come to the North Bay; it just began a three-week run in the Condiotti Experimental Theater at Spreckels Center for the Performing Arts.

While Dream House will definitely not be everyone’s cup of Red Rose, the decidedly nonmainstream show is bursting with more ideas, revelations and philosophical introspection than are usually found in 10 shows. Easily the most personal show the Independent Eye has produced in years, Dream House is also a first-rate showcase for Fuller, who plays all of her “sisters” with breathtaking physicality and grace. It is too easy to call performances like Fuller’s “daring,” a word that is doled out to nearly every actor or actress who gets naked onstage, something Fuller does as Lizzie the slut near the end of the show.

What is truly daring about this performance is not the nudity, but what Fuller does with it, using the moment to reveal the depths of insecurity and self-judgment that cripple so many women and men, acting out in heartbreaking vividness what must actually be going on in her head at that spectacularly vulnerable moment. I will not spoil the scene further by revealing too much (that’s Fuller’s job), but perhaps it is enough to say that Fuller’s performance is both defiant and emotionally raw.

The densely packed text is at times playful and silly (“A ladder! I could get high!”), coarse (“You can’t press the shit-clogs outta your pipes!”), cryptic (“I’d better figure this out before it figures me out!”), lyrical (“It’s not ready yet, it’s a dream–dreams leak!”) or psychologically spot-on (“I do have great empathy with people who feel they’re inferior, because they probably are”).

For all the show’s clever stage craft and affective lighting design, and despite Fuller’s practiced ease as the primary focus of the spotlight’s attention, Dream House is primarily a poem. It’s what Allen Ginsberg might have written had he been a woman. In Dream House, Fuller finds her own mesmerizing way to howl, and builds a remarkable–and remarkably weird–world around it.