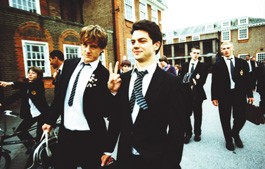 Polymaths, rejoice! That same quality that makes you, the quotation-stuffed individual, so unbearable in social life is celebrated in The History Boys, the film of Alan Bennett’s successful 2004 play. The characters go in for the Oxford-Cambridge game of “gobbets”: hear a quotation, identify the originator, explain why it bears relevance to a subject at hand. If you still ache with a chronic case of “dreaming-spires envy,” this film is for you.

Featuring a cast plucked entirely from the award-winning National Theatre production (including the extras, who are Theatre employees), The History Boys takes us to the glory that was Yorkshire in 1983–Sheffield, in fact, later to be the setting of The Full Monty. At a minor public school, a squad of working-class students prepare for the admissions interview. All have high hopes of places at Oxford and Cambridge; all are being prepared by Hector (Richard Griffith).

Griffith is never to be forgotten for his performance in Withnail and I, where he played Uncle Monty–lecherous, theatrical and bent as a dog’s leg. It’s been many years, but Griffith still has a face of immense comedic appeal–he looks as if he were descended from a long line of Toby jugs. Hector is a cracked variation of the beloved old public school teacher who has been a staple of British lore ever since James Hilton hacked out Goodbye, Mr. Chips. Grooming his students–and when I say “grooming,” I mean “touching inappropriately”–Hector teaches his charges the merits of discursiveness, of the odd quotation, the stray French phrase, the lines of unfashionable poetry by Thomas Hardy.

And then, as in all schoolroom dramas, the new teacher comes in. Stephen Campbell Moore plays the more handsome and brutally efficient pedagogue. He urges the students to think critically, instead of just letting their callow minds rove where they will. The opposition between the two main characters is a question of philosophy, between the emotional and the intellectual sides of the brain. The boys–who are as devilishly handsome as Dakin (Dominic Cooper) or as hapless as the gay, Jewish Posner (Samuel Barnett)–are surprised by what hard work school can be.

Bennett has been lightening the national mood in England since Beyond the Fringe, 40 years ago. Director Nicholas Hytner (The Madness of King George), who also directed the stage production in its London premiere, preserves his words without any serious effort to open up the play: circling camera movements here, a field trip to a ruined abbey there.

I thought the show could have used a woman’s touch. There isn’t nearly enough of Frances de la Tour, who played the giantess Olympe in the last Harry Potter. As a hapless longtime teacher at Cutler’s Grammar School, she gets out a show-stopping line about the woman’s point of view of history, but we never understand what drew her to the gloomy social science. (As I always say, those who can’t do, teach, and those who teach but know it won’t do any good, teach history.)

And the series of endings–including the loathsome theatrical device of the “where are they now?” speeches–violates what ought to be a ringing endorsement of the duffering, bookwormish life. The fun of learning is that we never know where it will lead, which secret password will open up what heavily-guarded door.