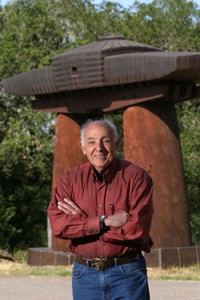 Man of the Hour

When artists converge on the Sebastopol Center for the Arts Oct.1­2 for a two-day marathon of sculpture-making madness, Dr. Walter Byck will see one of the most ambitious art events in North Bay history draw to a close. Byck, co-owner with his wife Marijke Byck-Hoenselaars of the Paradise Ridge Winery, is the progenitor of the Sculpture Sonoma event that began last May and has involved 12 arts organizations, 17 separate exhibitions (two of which are mounted at his winery), a free public street party and arts tailgate bash, and the efforts of over 100 hundred area artists.

MacArthur Fellowship recipient Ned Kahn has been honored; international art superstar Mark di Suvero has participated; Cloverdale wood sculptor Carol Setterlund received a hugely successful one-woman museum show; Cazadero artist Bruce Johnson has brought his remarkable Poetry House down from the ridge; and the list goes on. From the grounds of the LBC to Cloverdale’s downtown plaza to the foyer of the Sonoma Valley Museum to installations at SRJC’s Petaluma campus, every area of Sonoma County has been touched and informed by the massive reach of the Sculpture Sonoma project.

Working with the Cultural Arts Council of Sonoma County and funded by an initial grant from the James Irvine Foundation as administered by the Sonoma Community Foundation, Byck has–as we’ve noted many times in these pages–achieved something of a miracle with Sculpture Sonoma. No one in recent memory has been able to unify the disparate goals of some 12 arts organizations into a single vision as Byck has done this year.

Deciding to marry while visiting the Kröller-Müller Museum in the Netherlands almost half a century ago, the Bycks have spent the last decade transforming four acres of their winery’s property, all pygmy forest and golden hillside, into a free public space for viewing sculpture.

Unlike the Kröller-Müller, whose grounds are specifically landscaped around the museum’s permanent collection, the sculpture exhibition garden at Paradise Ridge changes annually, allowing the yearly visitor the deep pleasure of surprise. Artists are encouraged to alter the landscape to better fit their work; experimentation and conceptualism are welcomed, and sometimes the alterations of a previous year’s installation becomes a permanent fixture of the place.

A retired physician, Byck and his wife bought their property in Fountaingrove as an ideal spot in which to rear their five children. They proclaimed it paradise and later named it so. When the kids were grown, they used the acreage to make wine from the grapes already there, the property being the heritage of pioneering Japanese winemaker Kanaye Nagasawa, whose legacy remains paramount on the Byck’s ridgetop as reflected in a work by Bruce Johnson and inside the winery with a historial exhibit.

Honoring Dr. Byck with a Boho Award was certainly among the easiest of our decisions this year. While his Sculpture Sonoma project began in large part to honor and spotlight his ever-growing circle of artistic friends, it ends with a brief spotlight on this self-effacing dynamo of a man.