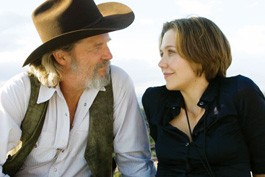 I haven’t read Arizona writer Thomas Cobb’s 1987 novel Crazy Heart, although it was praised by both Kinky Friedman and Donald Barthelme, and I’m sorry. The novel might have provided a key for the failure of guts in the Sundancean movie Crazy Heart. The film plays softball, despite the hefty acting by Jeff Bridges. Crazy Heart gives Bridges a belly-baring role, his slit-eyed Bad Blake as a kind of Bad Lebowski, a morose, sweet-talking satyr drinking his way to the grave.

Bad Blake is an outlaw country-western musician playing far-apart and none-too-lucrative gigs all over the West. He travels via an ancient 1978 Chevy Suburban, and he slaps together sets with pickup bands that he meets just before showtime. And in his few sober moments, Blake lives with the humiliation of having been commercially surpassed by a country superstar named Billy Sweet (Colin Farrell), who was once one of his backup musicians.

Touring in Santa Fe, Bad meets a former Oklahoma newspaper reporter named Jean (Maggie Gyllenhaal), who lets him pick her up. Typically, he has a great line for her, cutting off her questions: “What I wanna talk about is how bad you make this room look. Didn’t realize what a dump it was.” There goes journalistic ethics as far as the movie is concerned; Jean keeps covering his story after she’s slept with him, which bothered me more than the near 30-year age difference between them is going to bother some women.

Jean is single-parenting a young son. What truly concerns Jean is the question of what kind of influence this charismatic wreck of a man will be on her child. Add a long-distance factor, and the fragile relationship grows even shakier. Robert Duvall, who co-produced, plays a clean and sober bar owner in Houston who is also Bad’s mentor, and like Jean, he’s a character who doesn’t really live on his own terms. He’s there to echo Bad’s legend.

Scott Cooper, a first-time director, has nailed some details of a musician’s life, such as an argument between Bad and a sound man that has just the right amount of tension. Bridges does his own songs. Despite the credited input by T Bone Burnett, none of the tunes are really memorable, but you sink into them anyway. Bridges sings with the flair of a born performer, and the encircling camera gives the scenes some rhythm. Cooper also deserves props for a surprise he brings in, the unexpectedly kind way Billy Sweet behaves to Bad. It’s unusual in a movie to find out that a character named Sweet will behave sweetly, especially when played by Farrell, a chronic misbehaver himself.

But there are other matters that Cooper can’t seem to get straight, such as the question of what strata of fame Bad Blake occupies. Bad plays the lounges in bowling alleys and carries his own guitar. But he still has an L.A. manager who loves him and keeps tabs on him. The way Cooper goes in for a close-up on Bad when he’s pounding the drinks back says it all: Crazy Heart tells us that once Bad Blake unplugs his worst habit, all of his problems are over. This is a two-dimensional take on a drunk’s character, as two-dimensional as a drunk’s belief that drinking will solve all his problems. Then there’s the matter of Cooper’s truly banal visualization of Bad’s stab at rehab. It’s a meeting under the aspens, a setting as glossy as the commercials for the drying-out clinics on morning TV.

Crazy Heart doesn’t scratch the other things that might have embittered Blake, the way his fortunes changed as the public taste changed, the feeling of fury as age took him over, and the bitterness of not having much to show for himself after years of work. What integrity Crazy Heart doesn’t borrow from Bridges it picks up from the glorious wide-open-spaces cinematography by Barry Markowitz (Sling Blade).

Ultimately, it may be that Bridges is more damned fun to watch as a drunkard. His Bad has a hostile, coolly funny mean streak that goes away when he gets dry and sensitive. The role, then, is a conduit for Bridges’ upcoming performance in True Grit, where he will assay a really titanic punisher of the whiskey, Rooster Cogburn. Watching Crazy Heart, though, you think of that story of Greta Garbo leaving the theater after seeing Cocteau’s Beauty and the Beast, and saying “Give me back my beast.”