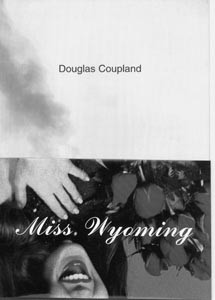 Road rules: Gen X author Douglas Coupland may be tired of talking about his new book, Miss Wyoming, but the critics aren’t–the novel is being hailed by some as a signpost of maturity in Coupland’s unorthodox writing career.

IT IS A DECIDEDLY low-energy Douglas Coupland who crouches at the curb in front of his San Francisco hotel. Bearing the weight of too many early mornings after too many long nights, he peers into the open doorway of an ultra-sleek black stretch limousine. As he contem-plates the vehicle’s cavernous interior, his face is a sloppy mix of sleep deprivation and mild embarrassment.

Generously arranged for by Coupland’s publisher, the imposing limo has been sent to transport the mild-mannered reluctant icon (author of Generation X, Shampoo Planet, and Microserfs) to the airport, where he’ll catch a flight to Seattle for another full day of interviews. With an audible sigh, Coupland clambers in and takes a seat, making room for me.

“Suddenly this feels really silly,” confesses my host, as the uniformed driver securely shuts the door behind us.

“I feel like we’re on our way to the senior prom or something,” says Coupland, peering through the tinted windows as we sail away from the sidewalk. “I feel like I should have brought you a corsage.”

Coupland, 38, a native of Vancouver, Canada, is currently finishing up a months-long book tour to promote his latest uncategorizable opus, Miss Wyoming (Pantheon Books; $23), the comic-tragic tale of two Hollywood players, one a seasoned producer of direct-to-airlines cinematic schlock and the other an emotionally wounded B-level starlet who was once a child beauty-pageant queen.

Taking advantage of strange twists of fate–he suffers a mystical near-death experience, while she is believed to have disintegrated in an airplane crash–they each drop out of their former lives, disappearing from the world’s cultural radar. The central story is about what happens after they reappear and accidentally merge into each other’s lives.

Short Cuts: An excerpt from ‘Miss Wyoming’ by Douglas Coupland.

Critics are divided over this latest offering, just as they have been since Coupland trampolined into the mainstream with 1991’s phenomenon-sparking, bestselling novel Generation X, the bible of the slacker generation. Yet the new book is widely recognized as the work of an increasingly confident (dare we say mature?) writer of idiosyncratic yet genuinely compelling fiction.

Which brings him to the West Coast, where he’s spent the last few days schlepping from bookstore to bookstore. He was hoping for a little free time to, you know, catch a movie or something, but no such luck for Coupland, who’s been receiving a surprising amount of media attention for a guy some critics wrote off years ago.

At the moment, though, Coupland wouldn’t mind a tiny bit less attention.

“I’m so tired of talking about my book,” he confesses, as our 35-minute ride begins. In demonstration of this point, he feigns snoring. “Promise me you won’t ask me anything about the book.”

“Well,” I think to myself, “although I understand how repetitious such book-hawking interviews can become, I nevertheless am a professional–as are you–and feel that I must ask you a number of precisely planned questions specifically focused on your latest novel.”

But what I say is “OK, I promise not to ask anything about the book.”

Fortunately, Douglas Coupland is the kind of author who has a lot on his mind and needs very little prompting to divulge it. In fact, the man who claims to have become an author only by accident–his book jacket lists his occupation as “designer and sculptor,” a reference to his art-school education and favorite hobby–seems to have something amusing to say on almost every subject.

He talks about movies–“1999 was just the best movie year. In the old days you would go to a movie and know everything that’s going to happen, but nowadays you go to a movie and you never know what’s going on.” And he talks about the mental habits of overly verbal people–“Even as I say these words to you, I’m seeing the words before me, like on a TelePrompter. The only time I don’t see them is when I’m sculpting”–and about the problem of Prince Charles’ face. But more on that later.

Which brings up another of Coupland’s favorite subjects: airline flight.

“For this one-year-and-a-half window, Sister Act 2 was like this spawn from Hell that followed me on every flight I took anywhere in the world,” he complains. “The current spawn from hell is Kevin Costner and Kelly Preston in For Love of the Game. ‘Kssssshkk. Tonight’s in-flight movie will be For Love of the Game with Kevin Costner and Kelly kssssshkk Preston.’ I’ve seen it so many times I know it by heart.”

Coupland’s corner: The author wearily contemplates the next interview.

THERE IS, in fact, just such a reference in Miss Wyoming. When the movie producer character plunges into his near-death experience, the doctor who attempts to resuscitate him gripes about the in-flight omnipresence of the filmmaker’s latest film, The Other Side of Hate, of which the doctor says, “They might as well have shipped the dailies directly up to the Boeing factory.”

“Perhaps,” I wonder, “if I mention this correlation, he’ll accidentally say something about the book.”

I boldly give it a try.

“I sat next to Josh Brolin once on an airplane,” he says. “It’s a rule of airline flight: you never get to sit next to Jody Foster or someone cool. It’s always like, ‘Excuse me. Are you Suzanne Pleshette?'”

The airport looms in the distance.

As a last-ditch effort, I ask Coupland to name the best or worst question he’s been asked during the tour.

“Well, there have been a lot of really good ones,” he muses.

“Bingo,” I think, envisioning some penetrating query from one of Coupland’s hyperintelligent fans.

“The best question,” he reveals, “was probably ‘How do you feel about genetically modified food?’ ”

“It’s a big deal in Canada,” he grins. Then, following some hairpin tangent that takes my breath away, Coupland is suddenly reminded of . . . Prince Charles.

“See, someday Prince Charles is going to be on our money and our postage stamps, and we’re all really dreading this. As long as he was married to Diana it was ‘Well, at least we might have an attractive person on our money.’ Then they got divorced and we all went, ‘Fuck. Now our money’s going to look like shit for decades.'”

As the limousine arrives at the terminal, gliding up to the white curb, Coupland adds, “The ironic thing is that Charles is this big anti-genetically-modified-foods person.”

And so our journey ends. As the driver unloads Coupland’s luggage, he stands up in the early afternoon sunshine.

And with a handshake and a final spirited yawn, Douglas Coupland vanishes through the double doors of the terminal. I climb back in the limo for the return trip, thinking, “Well, at least he’s a funny guy. And I did like his book, even though he wouldn’t talk about it. Next tour? It’s a date.”

Next time, though, I want a corsage.