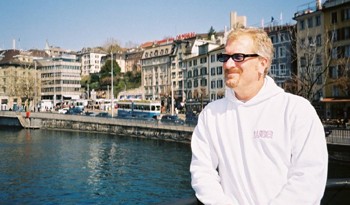 Honey of a Man: Doug Smith in Zurich. He and his bride Tina were married in Europe last year.

KRSH 95.9-FM morning DJ Doug Smith was killed on Saturday, June 18, in a solo crash while returning from the Russian River Blues Festival on his motorcycle. It was his 46th birthday. In honor of Doug’s life, we asked two writers who appeared weekly on the radio with Doug to give a short, graceful slice of their experience of him.

I didn’t receive word until early on Monday of my friend Doug Smith’s tragic death two days earlier. My family and I were on the second day of our annual tent-and-theater vacation, camping our way north toward Ashland, Ore., to the Oregon Shakespeare Festival. As usual, I planned to deconstruct my various Shakespearean adventures with Doug on our weekly Thursday-morning radio segment, Stage Fright, part of the morning show he’d hosted–charmingly, eccentrically, magnificently–for the last several years.

Then came the phone call.

It’s almost funny, the desperate things that flash through the brain when a call like that comes: it must be a mistake; it must have been some other Doug Smith; maybe it’s not as serious as they think; maybe, somehow, we’ll get Doug back again. Such thoughts disappear as fast as they come, and then we must sit there with the unchangeable truth: we’ve lost Doug Smith forever.

Doug himself had something important to say on the subject of death. Back in February, when Dick Thyne, another longtime KRSH DJ, was killed in a solo car crash, Doug said on air–and I’m loosely paraphrasing here–that when tragedy occurs, we try to mourn the life that was lost. We mourn the dreams that person will never see accomplished; the songs not heard again; the music not played; the pleasures not enjoyed. But it is more common, and forgivable, that we end up grieving for ourselves, mourning the experiences that we might have had, expected to have, but now never will have with the deceased. As a result, we comfort ourselves by sharing memories, important experiences that we were fortunate to have had, characteristics of that person that we will miss.

The things we will miss about Doug Smith are far too many to list in a few hundred words, the proof of which can be found on the KRSH website (www.krsh.com), where a stunning number of heartfelt, grieving messages have been posted since Doug’s death.

I will, of course, miss my Thursday-morning discussions with him, talks that always began with my reviewing a play that I’d seen and that ended who knew where, as Doug would throw verbal curveballs at me, attempting to provoke the kind of spirited exchange we both thought of as good radio.

I will miss the conversations we’d have after the segment, when, between playing songs, he’d launch a discussion of some book he’d just read or movie he’d seen.

Other things to miss: The way that Doug, after awarding a pair of tickets for some trivia question, would always soothingly say, “Good morning, the Krush, I do have my winners,” when answering call after call from hopeful trivia players. The way he always worked references to his wife, Tina, into the show, each remark a demonstration of how fortunate (and even a bit surprised) he was to be loved by someone so remarkable.

For each and every person who knew Doug or listened to him or felt his presence through the concerts he co-promoted, there are dozens of other things we will miss. Doug knew a lot about a lot, but I don’t think he really knew how greatly he was loved, and by how many people.

As we who loved him keep his memory, telling stories of who Doug Smith was and how he lived his life–what impact he made on us, without even knowing that he did–is surely a part of the story.

I met Doug Smith in the 1980s when I managed a pub in Cotati and he was a DJ. During morning prep, I’d call in a request, and he’d play it. It wasn’t long before we met at a show at the Cotati Cabaret–probably Willie DeVille, Chris Isaak or Neil Young, though I’m no longer certain–and I remember leaving with a question.

Was this guy really as nice as he seemed? Nothing suggested otherwise; it was my own experience that had me doubting. As months and then years unfolded, I’d laugh whenever the question surfaced, because by then I knew.

Amazingly, Doug Smith was as nice as he seemed.

“Nice” is a tricky word, often summoned when we can’t describe more compelling qualities. But Doug’s niceness was itself compelling in the way it encompassed an eagerness to listen, a universal compassion, a profound intelligence and an emotional generosity that could take your breath away.

For nearly four years, Doug and I co-hosted Krush Bites on Tuesday mornings. I am not a morning talker. By temperament, I am a writer; the solitude writing requires, especially morning solitude, suits me. If I don’t have a deadline, I sometimes don’t know the day.

A few times I forgot to call. There was no reason other than that I didn’t realize it was Tuesday, but I left Doug hanging, made him feel bad and made myself look bad. Anyone else would have dropped me cold.

Yet Doug defended me to those who wanted me gone, and after my third failure, we got together. “Tell me,” he said. When he finally understood that it was nothing more–and nothing less–than this odd writerly quirk, he helped me devise a plan: I put little Post-It notes on my bedroom door, the bathroom mirror, the refrigerator, the screen of my iMac. “Is it Tuesday?” they read.

They stayed up for months, until chatting with Doug on Tuesday mornings became as automatic as filing my columns on Mondays.

I heard the news early Sunday. That night, preparing for my weekly radio show, Mouthful, on KRCB, I awaited my one guest. Shortly before airtime, I realized he wasn’t coming.

“I have no excuse,” the magazine publisher wrote in an e-mail a few days later. “I simply flaked.”

I could sense Doug standing at my shoulder.

Of Doug’s abundant natural gifts, it is his emotional generosity that I most cherish and miss.