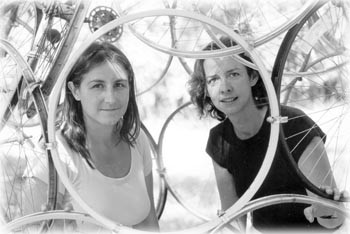 Artists take the inside out at Paradise Ridge

THE FIRST THING YOU SEE are the beds hanging from the trees. Or is it the chairs–empty-seated if you don’t count the large rocks piled inside of them? Perhaps you came in the other way and encountered first the ordinary bathtub, filled with mosquito fish and aqueous plants, the elaborately adorned hummingbird feeder, or the L-shape of two screen doors sitting stubbornly out in the middle of dry scrub, screening out exactly nothing.

You’d be sure to hear the birds, squawking and fluttering out of cages whose doors are meant to stay ajar in open invitation, and to see the glinting light of clear glass tea and punch cups hanging from medical tubing tied to oaks, flashing away in the flat glare of a hot afternoon.

Because, set out on the gentle slopes leading to Fountaingrove’s Paradise Ridge Winery, are a few acres of art. Showcasing work by five women–Judith Blankman, Etsuko Sakimura, Susan Leibovitz Steinman, Lorna Stevens, and Andrée Singer Thompson–Paradise Ridge owners Walter Byck and Marijke Byck-Hoenselaars have given their outdoors over to an examination of the indoors.

Titling the exhibit “Domestic Nature,” these five artists, led by Blankman–who conceived the initial idea–set about pacing off the land and discussing the possibilities inherent in the concept. Last April, their visions were realized in a chewy, thoughtful exploration of domestic themes as hung from trees, sprung from the ground, and laid out vertically in those shapes that mankind has always sought to wring from nature.

The work remains on the Paradise Ridge grounds through the end of the year, with the artists hosting a tour and talk Sept. 10 at the winery.

The work of each artist stands singularly out from the others, making one truly feel as if having entered the haven or domicile of five different entities.

Sakimura has created the most palpably homey sort of installation, using burned redwood–most of it embedded with small white granite teeth–rock, and cast stands to form low benches and tables that invite backs and bottoms. Stevens reports that on her numerous trips to the site she has often seen people picnicking on the work.

Stevens and Singer Thompson both have devoted their eyes to the avian population, Stevens feeding off the idea of nourishment as a domestic ideal, Singer Thompson providing housing for the birds, as well as the very literal birdbath described above.

Steinman’s installations bring the most diverse reading to the site, as she mimics the curves of an old oak by nailing white-painted tires onto the limbs; sparkles the site with party glasses; creates a baby crib ringing a tree, with only a sharp pile of rocks for a mattress; snugly secures a trunk with rope; and uses lawn mowers in a manner that seems almost predatory.

“The kinds of metaphors that I like to give to it are those that are kind of dreamy and liquid and have to do with nature and floating,” she says. “It’s not so literally about domesticity or about nature, but it is its own metaphor.

“I’m very vague about it on purpose,” she concludes with an enigmatic smile. “I could tell you what it means for me, but I don’t think that, other than for tabloid purposes, that is very interesting.”

Later, she relents. Sort of.

“It’s about wanting to be somewhere else,” Blankman explains, “in this sort of idealized state, but also to be where you are and to be dealing with struggles and change and figuring out who you are. With me, that’s what I’m facing in my life. I’m 38, and I’m trying to figure out some things about who I am and why I’m doing it.

“That’s a lie,” she says suddenly, shaking her head. “It is. That’s not what it’s really about.”

OK–that’s fair. After all, from the first mad housewife’s diary (see Genesis re: Eve) to today, discovering the truth in our own domestic natures has never been easy.