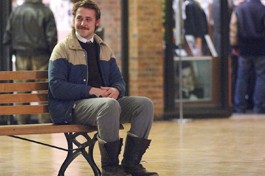 'Lars and the Real Girl' is one hella tomato

What do you think of critic David Denby’s comment in The New Yorker magazine that onscreen acting has never been better than now? Lars and the Real Girl, an indie film of great charm and not a little sappiness, is an example of the benefits and pitfalls of the kind of big acting Denby cherishes. It stars Ryan Gosling, one of the real hopes of his profession, in the title role.

Lars, a bottled-up bachelor living in the guesthouse behind his happily married brother, Gus (Paul Schneider, a redeeming factor in The Assassination of Jesse James), and his pregnant sister-in-law, Karin (Emily Mortimer). One evening, he presents to them his new girlfriend, a sex doll called Bianca, whom he adores and intends to marry. Gus, Karin and the rest of this far-north, Lutheran-Scandinavian Wisconsin town decide to treat Bianca as a human. The wise-woman of the town, Dr. Dagmar (Patricia Clarkson), insists that Lars needs to be indulged in his passion. This is one of those Frank Capra&–cum&–Northern Exposure small towns, where everyone pulls in the same direction.

Bianca is presentable enough; her face looks a little like Sally Fields, though the parted mouth is more Angelina Jolie. And we’re told, with all necessary discretion, that Bianca is anatomically correct. (There always has to be the possibility of consummation in a farce.) Soon, Bianca, swathed in donated hand-knitted clothes, is pushed around in a wheelchair to church and to volunteer work. She even gets a part time job in a boutique window.

Gus, the comic relief to this melancholy, doomed romance, is the one who is most worried—especially when Lars recruits him to board Bianca in his spare room. She’s a pious girl, Lars explains, and doesn’t want to spend the night with a man to whom she’s not married.

Working from Six Feet Under vet Nancy Oliver’s script, director Craig Gillespie spares this story of love and social discomfort from becoming a sour farce. It’s more than just an extended SNL skit. The winter light is right for this story of implicit sadness, especially when Bianca turns out to be too pure a spirit to survive.

Remember when Dustin Hoffman played an unsuccessful actor in Tootsie, fired from a job as a tomato in a TV commercial because he didn’t know what the tomato’s motivation was? Later, when Hoffman played an autistic in Rain Man, critic Pauline Kael cracked that Hoffman had finally got to play his tomato, a character free from the pressure of having to react.

The part of Lars in Lars and the Real Girl is a similar tomato, since no one aggressively confronts the deluded boy. I think what keeps me from falling in love, instead of mere like, with Lars and the Real Girl is that sense of stunt-performance-watching that keeps breaking out, as it often does, in this best of all possible acting eras. The problem with this kind of tomato acting is that it can be used for dramas that would make a visionary of Lars.

We’ve all seen the dreaded “sometimes when we touch, the feeling gets too much” movie, and Lars borders on it. This is especially evident in a scene where Clarkson tests Lars’ nerves; she can’t even lay a hand on the bottled-up young man without hurting him. The big “acting is better than ever” performance can, in lesser movies, end up as one long wince.

In one sense, Denby is right: everything else that’s going wrong with the movies—the writing; the limitless crassness of franchise-production; the commonness of poor visuals—is superceded by the willingness of the actors to make things real. Yet it’s the character-acting support that really make Lars more than a bizarre oddity.

This movie would be a dreadful male fantasy—starring a mute inert woman as a “real girl”—if it weren’t underpinned by three strong, caring women. Mortimer’s face warms this movie like an artificial sun, and this Scotch actress has a peerless Midwestern accent. “Are ya hungry?” she asks brightly, and you know she’s about to up-end a cornucopia. Clarkson brings every ounce of poise to this role, listening intently, bearing on her noble shoulders a huge French braid that makes her look like a Norsewoman.

I’d also mention the toothy, sweetly geeky girl that never gives up on Lars. As Margo, Kelli Garner might get overlooked, a slim girl unconscious of the fact that she wears stripes and plaids simultaneously, and who does this marvelous wiggly dance of triumph when she bowls a strike. There’s simply no substitute for the living.