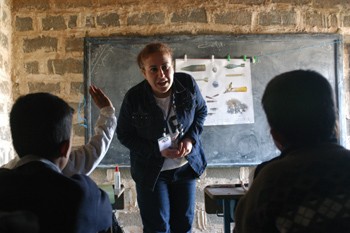 A film that features harrowing footage of landmine victims being smuggled out of the isolated nation of Burma, scenes from war-ravaged Colombia and Iraq, helmet-cam footage shot from Afghan and Bosnian de-miners, and shots of warehouses stockpiled with millions of Soviet-made land mines will soon be coming to a vineyard near you.

Titled Disarm: A Documentary About the Landmine Issue, this is a first effort by filmmaker Mary Wareham, 34, a New Zealand native who emigrated to the United States and now lives in Washington, D.C. The world premiere of Disarm is slated for July 31 as part of the 19th annual Wine Country Film Festival (WCFF), a feature of its “Champions of Conscience” series.

The WCFF has split itself into two events with two names this year. The Napa portion (now called the Napa Valley Wine Country Film Festival) runs from July 28 to July 31 at venues throughout Napa, Yountville and St. Helena; the Sonoma portion (Wine Country Film Festival Sonoma County) takes place at indoor and outdoor venues in Sonoma, Santa Rosa and Healdsburg from Aug. 11 to Aug. 28.

Though Wareham is being lauded as a filmmaker, she is quick to decline the status. She underscores, “I am not a documentary filmmaker. I am a member of a campaign to ban landmines. I did this film in my spare time.”

Wareham, who is employed by the activist group Human Rights Watch, says that after seeing other films about landmines that “had gotten a lot of things wrong,” she decided to get a camera and crew and make her own film. She also found her own funding for the film, making sure that it was her work and not the organization’s. Instead of using celebrity spokespeople or the famous musicians to whom she has access, Wareham chose to largely make the documentary center on interviews with locals in such places as Afghanistan, Iraq, Bosnia and Kosovo. The stars of the documentary are the people who live in the world of landmines, often shown on their knees and stomachs, poking thin blades into the ground or speaking to the camera about how many mines they had planted during a conflict–and having little idea where those spots are today.

Wareham is still working on finding a distributor for Disarm, but is more focused on getting the film translated into a multitude of different languages, including Arabic, French, Portuguese, Russian and Spanish. Her real hope, she adds, is to find a television distribution deal so she can get the work out to a broader audience.

Stephen Ashton, cofounder of the festival with his wife, Justine, says that Wareham’s work is in line with what the WCFF has been all about since its inception. “We have been first and foremost an international film festival–a bridge to cultural understanding,” he says, adding, “Sometimes filmmaking comes from the need to make films.”

“The magic is that being in the vineyards and even sipping wine–it opens the world of the sensibilities,” Ashton says. “The result is the film festival being a destination for wine, food, art and music–and for human compassion. In this context, viewing a film, the very landscape that you are a part of expands the soul.

“And,” he chuckles, “where else can you spend an afternoon watching a movie and talking with a Nobel laureate?”

The Wine Country Film Festival runs July 28–Aug. 28. ‘Disarm’ screens on Sunday, July 31, at COPIA. Filmmaker Wareham and Nobel Prize winner Jody Williams, who won the prize in 1997 for her work in developing a global ban on landmines and who is featured in the documentary, will attend the screening. Actor Sean Penn, a Marin County resident known for his activism, has been invited to present the festival’s annual Humanitarian Award to the Nobel laureate. Screening, 4pm; postfilm reception at 6:30pm. 500 First St., Napa. $10–$75. 707.935.FILM. www.wcff.org.