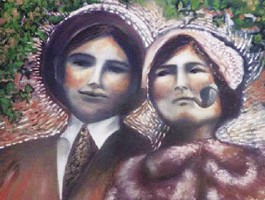 In the last year and a half, Napa County has lost six–soon to be seven–art galleries; two theater companies, including the Napa Valley Repertory Theatre, the county’s only professional acting troupe; and most recently, the Royal Academy of Ballet. Mirroring this crisis, Napa Valley’s once healthy Arts Council finds itself in dire straits, operating on funds that are only guaranteed through the end of July.

Napa’s plight is not unlike that of many arts councils, which have had to struggle to survive since 2003, when former California governor Gray Davis’ administration took a machete to the California Arts Council (CAC) budget, trimming it down from $19 million to just $3 million a year to serve every county in the state. (The state general fund, the NEA and the sale of arts license plates each make up one-third of this teensy pie.) The proposed CAC budget for 2006-2007 has gone up to about $5 million, but only because the price of arts license plates has finally increased in pace with inflation.

This bulimic budget purge has taken California to a shocking 50th rank in the nation for per capita state funding of the arts. Prior to the cuts, the CAC granted communities throughout the state roughly $30,000 to $40,000 to run their own arts organizations.

Although each county runs its arts council a bit differently, most of the councils function to serve artists and arts organizations, providing them with funding resources or marketing help. Some also grant money and operate art-related programs, like the successful open-studio tours currently run by all three councils in the North Bay.

Since the CAC budget cut, many arts councils statewide have had to close or become strictly volunteer operations, cutting way back on the services they offer. Rural councils like Mendocino’s have been hit hardest, but now Napa County’s is in dire straits, too.

Since the budget cuts, the Arts Council of Napa Valley slashed its annual budget from $400,000 to just $120,000. In contrast, the Arts Council of Sonoma County and the Marin Arts Council have budgets of $400,000 and $700,000, respectively. Sonoma County’s council grew exponentially in the last year due to foundation granting, while the Marin Arts Council has had to dig into cash reserves and freeze hiring and salaries (the five full-time staff members haven’t had a raise in almost five years). Meanwhile, Napa County’s arts council had to cut its employee pool from four staffers to one and a half: the executive director and a part-time aide.

Getting private donors to pick up the state’s slack is proving to be difficult. Michelle Williams, executive director of the Arts Council of Napa Valley, explains that there are about 550 nonprofits in the Napa Valley (not all of them active), almost double the county’s number of wineries. “Contrary to popular belief, the donor pool in Napa is very small and incredibly fatigued,” Williams says. “Donors give money generously, which is terrific, but the main focus here is health and human services. So the arts take a back seat, and rightfully so–it’s just that our back seat is so far back.”

Making matters worse, it’s hard to drum up interest in funding the day-to-day operational costs of an arts council. “Donors want to fund programs, but its not nearly as sexy to fund the organization itself,” says Williams.

Although Napa’s arts council has received money to continue funding its arts in education program next year, Williams says that the council can’t afford the staff to actually administer this money. Barring massive change, that program will not exist next year.

Brad Wagenknecht, a Napa County supervisor and the city’s former mayor, has been working with Williams to form an arts and culture commission. Although the board of supervisors has twice postponed voting this commission into being, Wagenknecht expects the commission will finally get the go-ahead next month after a few logistical details are resolved.

Wagenknecht, who has taught at Napa’s Redwood Middle School for some 30 years, says, “With all the emphasis on testing, we teachers are doing more ‘drill and kill,’ because we want to pump up those test scores. But the arts are really getting left in the dust–this corresponds to when the arts council had the stuffings kicked out of it by the state. Arts programs are dying. I try to think about a world that doesn’t have kids understanding how important artists’ expression is. Imagine no visual arts, no written arts, what type of life are we going to lead?” he pauses.

Two foundations have expressed interest in funding the Arts Council of Napa Valley, but only if the community first shows that it cares about local arts, says Williams. For now, these donors are watching and waiting.