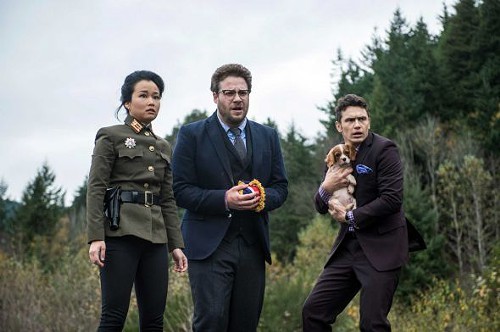 Update: The Rialto will be showing The Interview at 9:40pm starting Christmas.

No, they didn’t but such are the times we live in.

I just read that a few theaters are going to screen “The Interview,” pudgy faced North Korean dictators be damned. I was pleased to see that Berkeley’s Elmwood Theater is one of the brave theaters to show the movie. The movie house is the sister of Sebastopol’s Rialto Cinema. I wondered if they would show it in Sebastopol too but when I went to their website it was down. And when I checked the Elmwood site it was down too. Did North Korean hackers do it?

No, said Melissa Hatheway, the Rialto’s director of marketing and community relations. Just a buggy server or something. Or maybe the the rush to buy tickets crashed the site.

Hatheway said it was easy to slot the movie in Berkeley because they had a one-off movie they could bump but no such luck in Sebastopol. The movie list was set and couldn’t be rejiggered, she said.

Both sites are back online and everything seems cool for now. But I for one will remain vigilant against any moves from Pyongyang.