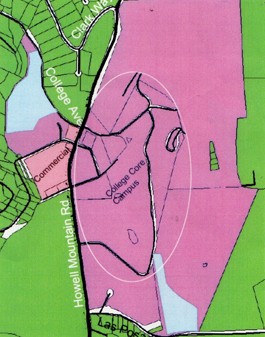 Proposed 'eco-village' could pop the peace in Angwin's bubble

It’s a familiar old saw, proponents of small-town rural tradition conflicting with those who feel times demand their town change, develop and expand. Development was precisely the reason why Ellen G. White moved the tiny Pacific Union College (PUC) out of a growing Healdsburg back in 1909, leading fellow Seventh Day Adventists to their new home in northeast Napa County. White observed, “While men slept, the devil sowed houses around us.” White and her followers named their newly founded community Angwin, after Edwin Angwin, from whom they had just purchased their property.

Already sown houses posed no problem on Angwin’s undeveloped 1,600 acres. There, 1,749 feet up on Howell Mountain, Pacific Union College was built anew. Decades passed, during which time practically every Angwin resident was a member of the Seventh Day Adventist Church.

Now, nearly a century after White felt compelled by residential development to lead fellow believers across the Mayacamas range—and many non-Adventists also call Angwin their home—PUC once again faces the prospect of a large residential development sown around it. Only this time the proposed development was initiated and is backed by members of White’s own flock. Opposition to the project is largely, though not exclusively, composed of non-Adventists living in and around the town.

Seattle-based Triad Development Corporation is teaming up with PUC to create what they are terming a “world-class eco-village that will be a showcase for sustainable development.” According to Triad, their 380-residential-unit village will include “70 acres of locally grown food, solar and geothermal power for new homes and business, rainwater harvesting, [and] 100 percent wastewater reuse” Furthermore, the developers stipulate that “35 percent of [the] housing is quality affordable and local preference housing.”

Like many institutions of higher learning, PUC faces serious ongoing financial challenges. And while public institutions draw from tax coffers, be they ever dwindling, and well-heeled private institutions have enormous endowments supporting them, PUC has neither tax money nor a substantial endowment for purposes of growth.

President of PUC Richard Osborn asserts that Angwin and surrounding communities stand to benefit from the project. “The eco-village is a rare opportunity to create a national model of green living with solar power, organic farming and preservation of forest land. The idea resulted from our need to increase our endowment to ensure our long-term viability and our desire to create a sustainable project consistent with our beliefs in healthy living,” he says. “The eco-village will accomplish our goals and provide the community with significant benefits. It will help meet housing needs of people who live and work in the area, and help us continue our efforts to serve the community, such as the preschool we operate, preserving and maintaining forests and public safety services. A village square and green will replace a strip mall with community serving retail and a place where the community can gather. This small project represents a one-of-a-kind opportunity to create a community with an unparalleled commitment to sustainability, social equity and environmental preservation.”

Not everyone feels the school’s financial woes are best solved by reinventing the community. The largely non-Adventist group Save Rural Angwin (SRA) touts wide-ranging allies in opposition to the eco-village development. The group has a list of over a thousand supporters whom SRA member Duane Cronk describes as “mostly upvalley people.” They likewise have the backing of both the Napa Farm Bureau and the Sierra Club.

Angwin’s so-called urban bubble is one of 12 such nonphysical creations scattered throughout Napa County. These conceptual bubbles were established three decades ago, intended as sites where development might be permitted, thus preventing unbridled development throughout the whole of Napa County. This plan was in keeping with an overwhelming vision that Napa County remain ag-based and largely undeveloped, allowing a smattering of small towns where development would occur. Reflecting this sentiment, county voters have over the years passed a series of legislative initiatives to slow developmental growth.

At an overcrowded March 4 meeting, the Napa County Board of Supervisors voted 3 to 2 to retain unincorporated Angwin’s controversial “urban bubble.” The development, should it be built, will boost Angwin’s population by more than 43 percent.

Angwin, while sparsely populated, seems to fit the urban bubble bill. But according to Cronk, “the bubble is a planning mistake.” He elaborates, “It would designate many acres of prime agricultural land for urban development and does not even include much of the existing village [of Angwin].”

When asked how the issue has escalated to the point that some 800 people—mostly eco-village supporters—felt compelled to show up at a county supervisors meeting, SRA member Kellie Anderson says, “We were promised participation, input and consideration for any development that would happen in our community. Triad said this would be a transparent process and that everyone in the community would have input. We were told they wanted to build something the entire community would want to have. Instead, we were given cookie-cutter cutouts. Show and tell. No one from PUC or Triad could answer any question except in the tiny area of their particular expertise. It was demeaning. Snappily dressed men. A complete snowjob. It had nothing to do with how we live or who we are. It was a town in a box. Angwin is already green—really, really green without Triad.”