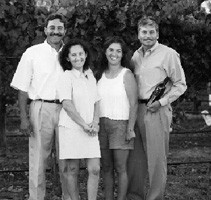 Wine appreciation is simple to sum up for Amelia Morán Ceja.

“You either like it or you don’t,” she says. “That should be your mantra.”

Ceja is the dynamic, bright-eyed force of nature behind Ceja Vineyards, the family wine label she founded with her husband and brother- and sister-in-law in 1999. The Ceja saga, however, arguably began decades before, in 1967, when Ceja patriarch Pablo and matriarch Juanita emigrated with six of their children from Mexico to the Napa Valley to work in the local wine trade.

Soon there were 10 children, and brothers Pedro and Armando grew up to become an engineer and winemaker respectively (Armando studied at the lauded enology and viticulture program at UC Davis). Amelia met and married Pedro in 1980 and later joined in a family purchase of 15 acres of Napa’s Carneros region. Three years later, their first vineyard was planted.

The family currently boasts 115 acres of vineyards spread throughout Sonoma, Napa and Petaluma. Eighty-five percent of their grapes are sold to wineries; the remaining 15 percent becomes wine produced under the Ceja Vineyard label.

“Pedro and Armando come from Michocan,” says Ceja, referring to the western Mexican state. “I come from Jalisco. But we were right here in 1967. We’ve lived here for 39 years. We began working in the vineyards, and now we own them. Now we are in control of the destiny of our vineyards and, ultimately, of our wines.”

“This is just such a wonderful gem, set in a pastoral setting; it’s not on the Highway 29 corridor or Silverado Trail. We’re not a Disneyland environment. We hope that everyone who comes here feels embraced. Nuesta casa es su casa. It’s an open-house mentality where we share. Wine and food is a magical experience. Wine with food is our philosophy.”

Ceja delights in the fact that fine restaurants throughout the country pair her family’s wines with their cuisine, including Napa’s legendary French Laundry. That said, Ceja is not picky about how her wines are paired, just that they are.

“You don’t have to prepare an elaborate meal to enjoy food and wine. I, for example, like popcorn and wine,” she laughs. “There have been so many obstacles placed in front of the simple and pure enjoyment of food. Do you need to know anything about wine to enjoy it? No. All you need to know is whether you like it or you don’t–period.”

Ceja has long been an advocate of what can be called the pragmatic-palate approach to wine and food. Though she allows that an increased knowledge of wine may add to one’s overall appreciation of it, she also reminds that it won’t change the way a wine tastes, just the way one tastes it.

Ceja likewise balks at the persistent notion that fish should be paired with white wine and red meat with red wine. To prove her point, she launches into a grocery list of her own food and wine pairings with such attention to detail that one is unsure if her words are meant to be convincing or appetizing.

“I enjoy red wine with seafood. I’ll drink a Pinot Noir with salmon ceviche. I’ll have oysters with our Merlot–especially with a little grilled tomatillo salsa,” she explains, briefly describing with mouth-watering specificity how to prepare the family recipe. “I’ll drink Chardonnay with steak. Perhaps one of the most perfect culinary marriages is Cabernet and beans.”

Ceja lets the thought settle for a moment, as if to test the mettle of this reporter’s gourmandise. “Think about it,” she persuades, “legumes and corn tortillas–perfect protein. People think of eating meat with Cabernet, but why not legumes and corn tortillas with Cabernet? It’s quite an incredible experience,” she says as the energy rises in her voice. Then she pauses as a revelation blooms brightly in her eyes. “Do you know that I’m speaking to the rest of the world, just by that mere fact? Beans and Cabernet! I’m speaking to Indian cuisine, Middle Eastern–legumes are consumed all over the world.

Gustatory madness or marketing genius, it’s anyone’s call, but the opinions of others likely amount to little more than a hill of beans to Ceja. She’s got bigger fish to fry (and pair with red wine), such as evangelizing the merits of area producers and wine drinking in general. Moreover, Ceja is confident that her family operation will find its place in the enological history the way that wine icon Robert Mondavi’s has due to his tireless promotion of Napa Valley wines in the world market since the 1960s.

And when Generations X, Y and Z explore their palates, Ceja wants the exploration to be conducted with wine–anyone’s wine.

“I’m not interested in the little picture. I’m interested in the big picture. Yes, it’s great if they buy Ceja wine. But in the bigger picture, they will explore lots of different wines, and that’s what’s going to grow the industry even more,” she says. “It’s a $45 billion industry, which is quite monumental. Our contribution is going to be felt for generations to come.”