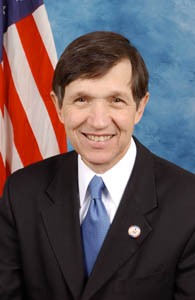 Man With a Plan: Congressman Dennis Kucinich is looking to make a few changes in our administration.

Voters who are looking for an alternative to duct tape, Big Brother, and decades of war certainly could do worse than Ohio representative Dennis Kucinich. The congressman, who is one of nine contenders for the Democratic presidential nomination, is lesser known than some of his colleagues–and commentators have downplayed his chances of getting the nomination–but his liberal stance on issues like the potential war in Iraq are gaining him support.

On March 29, he will speak at a Praxis Peace Institute event at the Marin Center.

His proposed legislation to create a Department of Peace would move the nation from “wars to end all wars” to “peace to end all wars.” He has also introduced legislation to label genetically engineered foods, supports single payer healthcare and retirement security for all, and wants to cancel “free trade agreements” that have lost hundreds of thousands of jobs.

Kucinich supports a woman’s right to choose, sex education, family planning, and contraception. He shows up at peace rallies, and he marched with workers through the streets of Seattle to protest the policies of the World Trade Organization. He knows what it’s like to live in a car.

In a recent interview with Kucinich, I asked a few burning questions.

Good people with good hearts believe what they hear on the nightly news or read in the morning paper. But in the corporate media, much of what passes for news is really propaganda. Do you have specific ideas for changing that?

I think there are so many different media outlets that it’s tough for people to understand what’s real and what isn’t. I think there is a sense in which we have to trust our own intuition about what we believe is going on.

It’s important for people to look for alternative resources when the major media may not be presenting information which is at variance with the message of the day at the White House.

Do you think that recent moves to impeach George Bush have merit and are worth pursuing?

I’m not in favor of impeachment. I think we need to make the peace movement visible in this country, and we need to work for candidates who want to create structures of peace in our society [and] who want new foreign policies which rely not on unilateralism and preemption, but on cooperation and support for the United Nations. An effort towards impeachment would only serve to strengthen the current administration.

With passage of the USA Patriot Act, the attorney general of the United States gained the legal right to arrest anyone in the country without specific charges and hold them indefinitely. Do you see any way to recover our civil liberties and prevent the passage of new legislation that will erode them even further?

We need to work to regain those civil liberties that have been ceded to a government which is determined to stay at war and therefore keep this nation on alert. The Patriot Act ought to be repealed. We cannot achieve security in our society through having a government dedicated to war. The attack on Iraq will increase the jeopardy for our own citizens. We need a different response to the challenge of terrorism, which is to enforce the law using good, old-fashioned police and detective work, and wherever that can’t work, using the international community to take coordinated action towards peaceful resolution.

The Patriot Act was a step in the direction of establishing a type of government that is really foreign to everything that America stands for. This will be an issue in the 2004 election.

How did the Patriot Act get passed?

Through the Patriot Act, the administration intends to control the Internet as well. Is there any way to prevent this?

I think that the peace . . . and civil-liberties movements must become visible. People need to be heard from, so as to create some resistance to this move toward undemocratic structures.

The Bush administration’s Defense Department budget–$380 billion and climbing–represents about one-half of every tax dollar spent. Is there any way to shift government-spending priorities, especially now with fear so dominant?