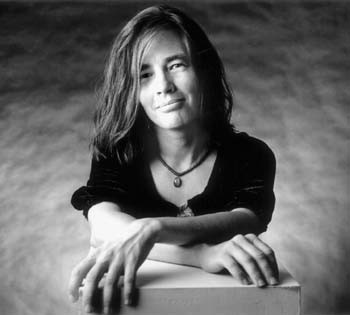 Roaring of the Road: Joanne Rand has happily put what’s important to her ahead of career advancement.

Joanne Rand’s new CD ‘Into the River,’ speaks to her personal peace

It’s a common human struggle: Our egos yearn for success and recognition, yet there’s that part within us that wants to simply live and enjoy life instead of spending so much energy and worry in trying to achieve.

It’s a struggle that has surfaced again and again in Joanne Rand’s life. And again and again Rand has chosen to follow her heart rather than her ambition. Granted, Rand would probably have had more commercial success by now if she had kept her focus on her career. Yet the strength of her songs is that they speak so genuinely about the importance of relationships, about the desire to be in a place of natural beauty (rather than in the city, where there are better career opportunities), and about the many other facets of life that don’t have to do with making it big.

As an example of putting love before ambition, take the time, about a decade ago, when Rand and the Little Big Band were riding a wave of popularity in Sonoma County. They were receiving accolades from both critics and fans, and the sky was the limit. Then Rand found out her brother had AIDS, so she packed up and moved to Seattle to be with him.

Not long after he died, Rand wrote a song called “The Roaring of the Road,” which symbolizes career and acquisition. One line in the song says, “Love is more important than the roaring of the road.”

That may have been the first time Rand so clearly spelled out her life’s path. But her choices, both before and after, support this point of view.

Rand eventually moved back to Sonoma County. But then last November, she and her husband, Greg King, and their daughter, Georgia, moved north to the Siskiyou Mountains, where the Salmon and Klamath rivers meet.

“It simply feeds my soul to be out in nature like this, to be among the trees and mountains and the river,” Rand says by phone from her new home. “But the very first month we were here, we didn’t see a single human being. That was kind of tough, but then we met a couple of people, and they introduced us to a couple of more, and it turns out there’s a pretty cool little community here.”

Even so, Rand still considers Sonoma County her “community and cultural base. It’s still where most of my friends are and where I feel the most understood and supported.” That’s why she chose Sebastopol as the place to have her CD release party for her seventh album, Into the River.

Like all of her albums, Into the River draws upon what is happening in her life. And these songs focus on love and family and the environment. There are also many references to the Sept. 11 tragedy and its aftermath of fear and sadness.

Rand’s style is folksy, but it’s not particularly smooth, rhythmic, or lulling. Instead, her emphasis is on using her voice to express the underlying meaning and feeling of the songs. And often, her voice sounds primal, more like raw nature than something cultured and civilized.

She poignantly sings about her longing to raise her daughter in a world without anthrax and missiles and suicide bombers. She sings about the need for love and peace and compassion. But Rand doesn’t come off as the wise sage telling the rest of us what we need to do. Instead, she’s a fellow traveler just trying to make her way through the world.

In fact, her CD begins with the song “Jumpstart,” which she considers the “dropped stitch” of the album.

“‘Dropped stitch’ is a Native American concept,” Rand explains. “When making a weaving, they intentionally drop a stitch somewhere in the weave, as a testimony to our human imperfection. To me, [“Jumpstart”] is the one song where I admit my weakness and self-doubt.”

In it, she sings about that struggle between ego and the drive for success, and the desire to live a simple, content day-to-day life.

“I still have the burning desire to leave a legacy, but I don’t take it as seriously as I used to,” she says. “I consider my daughter, Georgia, to be my greatest masterpiece, my mark left on the world.”