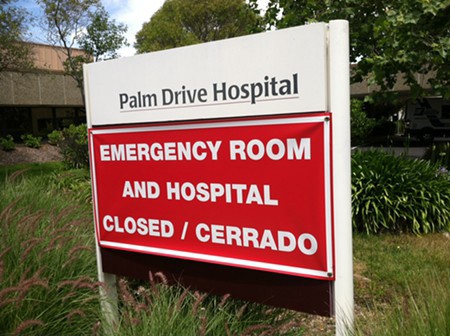 There’s still a ways to go, but Sebastopol philanthropist-businessman and out-front Palm Drive Hospital booster Dan Smith says to keep an eye out for April 6, 2015.

That’s the “projected opening date” of the now-shuttered West County hospital, says Smith, who has been working with Santa Rosa pulmonologist Dr. James K. Gude on a board-approved plan to try and reopen the hospital as a financially viable, sustainable business with an emphasis on specialty services. The beloved hospital went bankrupt and closed in late April.

In the intervening months, Gude has spearheaded an effort that would re-open Palm Drive and make the facility a “center of excellence for certain kinds of services that would draw people from places outside of West County,” says Smith. The reopen plan offers limited in-patient beds, acute-care services and an emergency room—but under the aegis of “a specialty service building that’s also a hospital,” says Smith.

So far, Gude and Smith have lined up commitments from a neurologist, a urologist and a specialist in minimally invasive spine surgeries, all from other area health outlets, says Smith. “They are part of the plan, and they have made commitments that they would bring their practices here,” says Smith. “That’s all happening because we have Dr. James Gude.”

The plan has gotten “positive” feedback from the Palm Drive Health Care District board of directors, says Smith, though “there are still people who are trying to understand whether it can be financially feasible, and that’s a process we’re still in the middle of. The issue is: How much start-up capital do we need? We’re restarting a business with 200 employees from zero. That’s a complex problem—and we’ll need $9 million to $12 million to get started.”

Board vice president Marsha Lustig is one of those people. She’s “very hopeful and hope that’s what happens,” insofar as the proposed April reopen, but says she’s still waiting for the financials. “Some financials,” she says. “We haven’t seen any!”

They’re coming next week, says Smith. He expects that the facility would need about $1 million annually for plant upkeep and maintenance—”It’s well within the district’s ability to find funding for that.”

The proposed April reopening, Smith says, is moving right ahead. “We’re putting all the pieces together to meet that goal,” says Smith, who is pushing a fundraising effort that aims to raise $9.2 million. “In the last week we received commitments for $1 million. It’s going extremely well, even better than I had anticipated.”

Medical marijuana activist Jacqueline Patterson is one of several local cannabis activists on hand for a big medical marijuana conference this Saturday, Nov. 1, at Dominican University in San Rafael. “Medical Cannabis: The Science Behind the Hype” will offer testimonials from cannabis users aged 10 to 81, including Patterson.

The Bohemian interviewed Patterson in September for a
story on the state of medical marijuana in California. She’s been using cannabis since she was a kid to help with a severe stutter. She tells the Debriefer that one focus of the conference will be the hot-button issue of treating pediatric cancer with pot—Bodega Bay “cannabis alchemist” Mara Gordon will give a talk on cancer, kids and cannabis.

The conference is hosted by the United Patients Group, a medical-cannabis consulting firm in Larkspur, and runs 10am-6pm. Admission is $50.