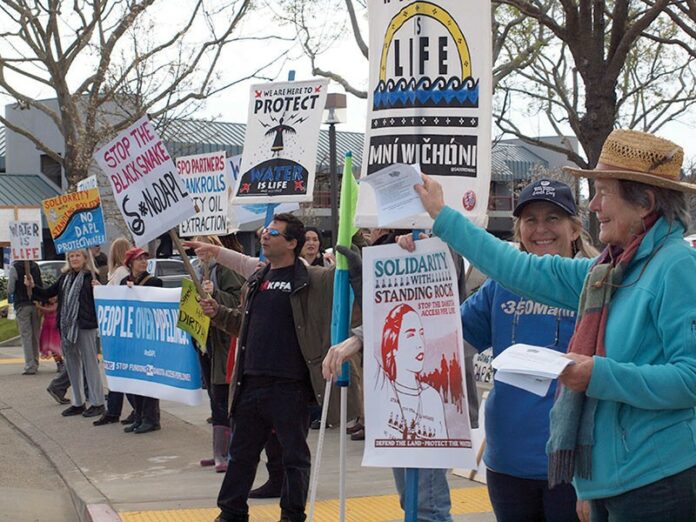 Last Friday, the organization Sonoma Solidarity with Standing Rock descended on SPO Partners in Mill Valley to protest the Dakota Access Pipeline project in South Dakota. SPO Partners is a hedge fund with ties to the DAPL project (“The Spigot,” Oct. 26). In a statement, Patrick O’Connell says organizers picked SPO “because they are the largest investors in Oasis Petroleum, [which] is one of nine companies supplying oil to DAPL.” On Feb. 24, O’Connell and the Sonoma No Dakota Access Pipeline support group presented a letter to SPO Partners managing partner John Scully that charged, “We believe that SPO Partners investments in Oasis Petroleum is a criminal act”—and said that because of the proposed route through sacred Sioux land, the criminal violation occurred under the so-called incitement offense of the Genocide Convention Implementation Act of 1987.

Sgt. Spencer Crum of the Sonoma County Sheriff’s Office reports that an ongoing internal-investigation at SCSO into a controversial arrest in Boyes Hot Springs has concluded and awaits the signature from Sheriff Steve Freitas. The arrest involved three SCSO deputies and one suspect, who was in his bedroom at the time of the October 2016 incident, which began with an anonymous call about domestic abuse. The suspect was Tasered by two of the deputies, including Deputy Scott Thorne, who also beat the man with his baton. Thorne was fired from SCSO after an administrative review of the body-cam video, and all charges against the victim were dropped. An SCSO-prompted criminal investigation by the Santa Rosa Police Department led to a felony assault charge against Thorne by the Sonoma County District Attorney. As a probationary officer, Thorne did not have civil service protections afforded the other two veteran officers on the scene, though Crum says those protections aren’t an inoculation against accountability.

“Thorne was on probation; the other two weren’t,” he says. “If it is substantiated that any deputy uses excessive force, they can be terminated regardless of probationary status.”

Thorne pled not guilty to the excessive-force charge in mid-January and is due back in court later this month. Meanwhile, the other two deputies—Beau Zastrow and Anthony Diehm—remain on duty. Once Freitas signs off on the internal investigation, which is focused on the actions of those officers, not Thorne, it goes to Jerry Threet at the Independent Office of Law Enforcement Review and Outreach, for his review.

BIG MAN ON THE MEND

Santa Rosa’s most prominent African-American citizen spent much of Black History Month in the hospital, but we’re pleased to report that Elbert “Big Man” Howard is on the mend and back at home after leaving a health-rehab facility late last week, according to his wife, Carol Hyams-Howard. Howard was a founding member of the Black Panthers in 1966. The Bohemian wishes him god-speed in his recovery.