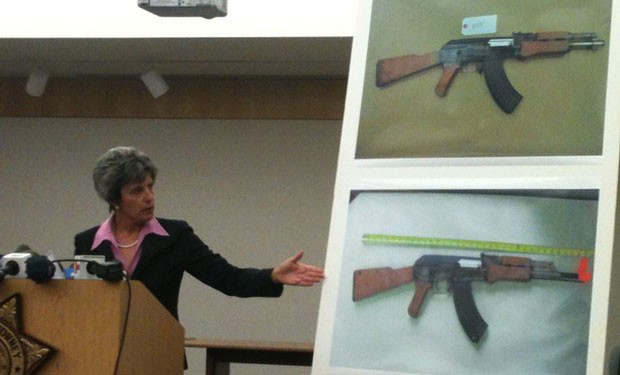 No charges in Lopez shooting; Schroeder Hall opens at GMC

Ravitch’s afternoon press conference was held after her office errantly sent out an e-blast about her decision Monday morning, then took it back in a follow-up email. By then, local media had jumped on the story—and Ravitch was left in the unenviable position of having to call Lopez’s parents with the news after it had already broken.

The Justice Coalition for Andy Lopez (JCAL) had previously scheduled a protest for outside Ravitch’s office early Tuesday afternoon, before any decision had been announced. Activist Mary Moore says she was perplexed by the roll-out of Ravitch’s announcement. Moore had assumed, she says, that the timing of Ravitch’s announcement meant the district attorney would be going for an indictment of Gelhaus, as a way to defang the promised protest.

Monday, Ravitch defended her decision and the investigation, and encouraged Santa Rosa’s Latino population to come together and move forward.

Ravitch said State Attorney General Kamala Harris had been sent a copy of her 52-page report exonerating Gelhaus, and that it was sent to the Sonoma County Grand Jury and the U.S. Department of Justice. Any of those entities might choose to act on the Lopez shooting—and the JCAL pledges to keep the pressure on until one of them does.

“We want the Department of Justice to look at this,” says Moore. —Tom Gogola

After the idea was suggested almost 20 years ago, the Green Music Center will become a reality with the opening of Schroeder Hall.

The exterior of the 250-seat performance center has been complete since before the 1,400-seat main hall was built, though the interior required about $5 million to finish when the main hall opened two years ago. “I think we all would have liked to have seen it completed sooner,” says Anderson, who suggests that a sluggish economy slowed down donations to the project.

The hall will mostly be used for music education, says GMC co-executive director Zarin Mehta, who has booked a strong lineup for the Aug. 22–24 opening.

Pianist David Benoit, known for his recordings from the Peanuts music library, will perform a private show Friday night for major donors that include Jeanie Schulz, widow of Peanuts creator Charles Schulz (the hall is named after the Beethoven-obsessed character from the comic strip). Joining Benoit through the weekend are pianist Jeffrey Kahane, organist James David Christie with soprano Ruth Ann Swenson, and others.

Green Music Center will also feature a “Sundays at Schroeder” event with up-and-coming musicians. “I want to develop an audience and see what kind of music suits the acoustics best,” says Mehta.—Nicolas Grizzle