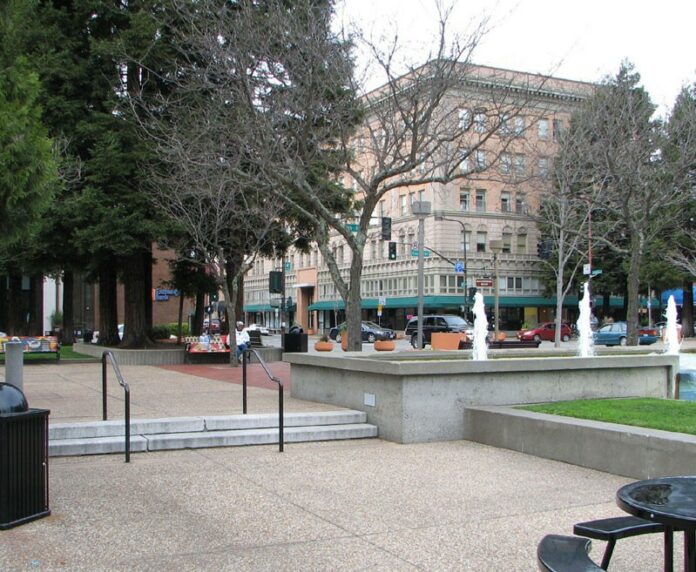 From Debriefer to You: trees, trains and, er, crabs

So what’s the story with the big redwoods at Courthouse Square? Is the city of Santa Rosa going to tear the trees down to make way for a business-friendly block of new parking spaces as it re-unifies the square by closing off Mendocino Avenue between Third and Fourth streets and rendering it a pedestrian thruway?

Debriefer talked to a couple of Santa Rosa officials last week to get the latest on tree-related news, and while there’s no doubt that some trees are going to be removed, the city assured Debriefer that it is doing everything it can to limit the feared micro-deforestation. It has enlisted the public and the square’s designer to come up with possible work-arounds in the service of saving trees (they might even plant some new ones)—especially a group of “legacy” redwoods that are older than dirt and are really quite majestic.

Tree-loving critics have thrown shade on the city for allegedly selling out the trees for more parking, and contributing to the destruction of the planet in the process. Jason Nutt, Transportation and Public Works Director for Santa Rosa, describes the business-led push for additional parking as a “key feature” of the plans—though he stresses that the demands for parking are not necessarily a priority for the city—as the reunification gambit enters a key phase.

A couple of dates to keep in mind as the plan moves forward toward a final design and construction decision. Jan. 9 is the tentative next public meeting in Santa Rosa and follows on earlier meetings where Santa Rosans demanded a redwood-friendlier project. The meeting will feature updated designs for public review. The Santa Rosa City Council will then meet on Jan. 26 to take up the various alternatives. After a final design is chosen, the city will issue a request for proposals around the end of February. Santa Rosa officials hope to see the project completed in time for next year’s holiday tree lighting, which means that there will be at least one tree left in the reunified square by this time next year. And lots more, in all likelihood.

Debriefer has been studying state-issued domoic acid charts on Dungeness and rock crabs like they’re some kind of lost book of the Bible, as a state shutdown of the fisheries enters its second month with no sign that they’ll be reopened anytime soon. Levels of domoic acid, a ghastly gastrointestinal distresser, remain too high in too many places along the coast for state health officials to begin any kind of countdown toward a season opener.

So stop thinking about your blown Christmas Eve menu and start thinking about what’s possibly next for the hundreds of crabbers around the region and state who’ve been negatively impacted by this disaster. U.S. Rep Jared Huffman and other California lawmakers have already sent a letter to Gov. Jerry Brown that asks him to declare a disaster in the event that the season is outright canceled (which hasn’t happened). That declaration would help local lawmakers like Huffman direct federal financial relief to out-of-luck crabbers, many of whom say they’d rather get back to work hauling crab pots than accept a handout.

It was a last-minute nail-biter and U.S. Reps. Nancy Pelosi and Paul Ryan had to eat some steaks in private to get there, but last week Congress passed a $1.1 trillion spending bill that included $20 million for the Sonoma-Marin Rail Transit system to extend its line from San Rafael to the Larkspur Ferry Terminal. The commuter rail is expected to begin “Phase 1” service by next December, between the airport in Santa Rosa to the Larkspur terminus in Marin County. Still to be funded is a
Phase 2 build-out to Cloverdale.