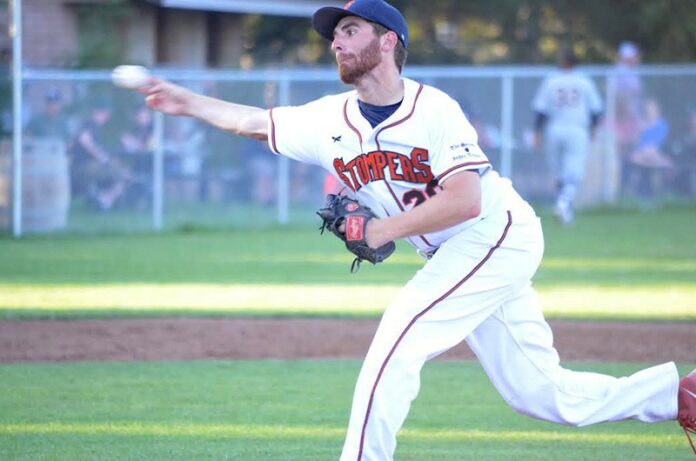 When the Sonoma Stompers’ Sean Conroy pitched a 7–0 shutout against the Vallejo Admirals in June he made history, and it wasn’t necessarily for his stellar performance on the mound: Conroy is the first openly gay, actively playing professional baseball player.

Last week, the Baseball Hall of Fame and Museum in Cooperstown, N.Y., announced that it would acquire Conroy’s jersey, his hat, a baseball, rainbow-colored arm warmers and socks, and the signed team roster from the June 25 Pride Night game.

“When I found out I was going to be in the Hall of Fame, it was definitely unexpected,” Conroy says. “I feel honored that they recognized the whole team, and the way in which they supported me and each other that night.”

Conroy is a native of Clifton Park, N.Y., and a graduate of Rensselear Polytechnic Institute, where he broke school records for his pitching excellence. In 33 starts at RPI, he went 21–7 with an earned run average of 2.07.

At the June 25 game, Stompers players wore the rainbow-colored socks and arm warmers to show support for Conroy. At the end of the game, his teammates ran out to home plate and hugged him. Fans of all ages flooded the field, asking for autographs.

In the late 1970s, legendary L.A. Dodgers player Glenn Burke came out privately to his teammates and staff. In the 1980s, Burke came out publicly after retiring from the pros.

Gay baseball fans are elated, including Ken Rogers, a fan who attended the Stompers Pride Night game. “Baseball has always been a great game, but never complete for me,” says Rogers. He says he never saw gay players on the field until Conroy.

“It feels like the game finally loves me back.”—Sarah Stierch

A recent report in Marijuana Business Daily noted that the massive wildfires in Lake County and elsewhere in the state could conspire to raise the price of medical cannabis for consumers. The online news site talked to a purchasing manager at the Harborside Health Center in Oakland, who confirmed that raging wildfires had destroyed much of the crop Harborside utilized from a grow site in Clear Lake.

But fear not, medical-cannabis users: fire-driven price spikes for medical cannabis are not an issue at the Sonoma Patient Group.

Sonoma Patient Group president John Sugg says prices are holding steady. “I really don’t think we’re going to see a tremendous impact here,” says Sugg, speaking from SPG’s Cleveland Avenue dispensary in Santa Rosa. “We’re pretty small. It depends on where you are, I suppose.” He adds that given Santa Rosa’s semi-rural location, much of the dispensary’s product is grown locally indoors or in small outdoor gardens.

Who is feeling the burn? Nevada and other states that rely on a steady supply of illicit California cannabis. “Probably the biggest effect will be on the big people who had big grows that burned down what they were going to sell to other states,” says Sugg. “The reason that it goes out of state is because they get more money for it.”

For cannabis dispensaries, he says, a pound of marijuana has had a steady wholesale price of $2,000–$3,000. “The dispensaries have been doing it for a long time, and the price is pretty constant,” he says.—Tom Gogola