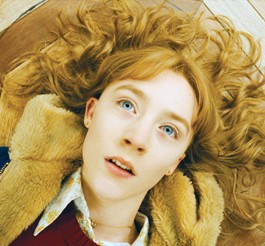 It's not such a wonderful life in 'The Lovely Bones'

Film adaptations of celebrated novels are a sort of X-ray; any manipulation or self-importance in the text is soon laid bare. The success of the book The Lovely Bones is easy to understand. What adolescent hasn’t thought “If I were dead, they’d be sorry”? And the appalling way the 14-year-heroine, Susie Salmon, dies sticks with the reader: the worst thing in the world. The italics are by author Alice Sebold, who experienced this worst thing, as she noted in her memoir Lucky.

Peter Jackson’s film of The Lovely Bones is set in Pennsylvania in the early 1970s. Susie (Saoirse Ronan), a girl who has never even been kissed, is dealing with high school life. One winter day, on her way home through a stubbly cornfield, she is lured into an underground lair and raped and murdered by a neighbor.

From the antechamber to heaven, Susie watches what happens to her family in the years that come. She’s serene if lonely; the way station to heaven is her own invention, a paradise with all the pet dogs and candy and peppermint ice cream she wants.

What keeps Susie from moving on, it seems, is her murderer. He has killed before and may kill again. (This element of vigilantism keeps The Lovely Bones from looking too much like the cover of a Jehovah’s Witness pamphlet about heaven.) Jackson’s approach to the scene of violence is symbolic. The murder is suggested through focus on inanimate objects: a straight razor, the broken rung of a ladder. Jackson’s gift is taking a “What would Hitchcock do?” approach to the material. (He even gives himself a Hitch-style cameo.)

The most satisfying moments come in the too orderly lair of the maniac and in the close-ups of the souvenir he took: a silver house from Susie’s charm bracelet, a symbol of the home that he destroyed. Jackson can get intense in the classic stuff: the minute clicking of a loose floorboard that lets the killer know there’s an intruder in his home, though it’s easier to respond to the thriller than it is to the spun-sugar heaven.

As in most movies aimed at young adults, the adults are freakishly dressed weirdoes. Stanley Tucci, following up the most endearing acting of his career, as Julia Child’s dapper husband in Julie & Julia, is lamentably miscast as the murderer: equipped with bug-eyed blue contact lenses and a limp, combed-over Peter Stormare hairdo.

Mark Wahlberg, as the father, has essentially the same hair he had in Boogie Nights—but this time, the hair has creative differences with the way Wahlberg wants to play his scenes. Mom Rachel Weisz goes on some weird hejira to Sonoma County to pick apples; the orchard has the same animated pollen as Susie’s heaven. Standing in the gap, for welcome if broad moments of comedy relief, is grandma Susan Sarandon, hitting the cigs and guzzling the cooking sherry.

You’ll have noticed that really metaphysical fantasies give all the harsh logical lines to the drunks, whose job is to throw the cynics in the theater a bone. This happens when Sarandon’s Lynn tells Susie’s brother, Buckley (Christian Thomas Ashdale), that his sister is in heaven. And when Buckley contradicts her, Grandma snaps, “She’s dead, OK?” In this instant, the X-ray quality I described earlier shines through the movie: the grieving and haunting looks petulant instead of eternally sad.

Ronan makes an effectively macabre staring angel, but she’s not quite the mousy nerdish girl turned into a master of a universe. One can’t feel what it was that made this book seem unreadably sad. There’s no good way to patch the illogicalities. Take the iron safe that holds the bones of the title: decomposition gasses have no place in a fantasy, but most of the audience are inveterate watchers of autopsy shows on TV, so it’ll stick in their craws. The January release is telltale of the film’s off-putting nature. Strange that The Lovely Bones didn’t get wide release by Christmas, since it’s essentially It’s a Wonderful Life—with child murder in it.