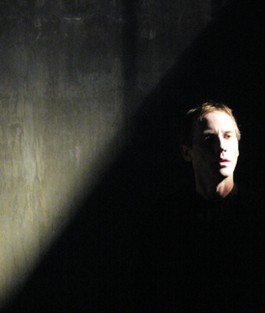 “I think, as actors and directors,” Lindsay continues, “we often look for too many easy ways out in doing Shakespeare, we try to show the black and white, we avoid giving audiences the choice to decide for themselves who is right and who is wrong, and instead we try to serve up the answers. Hamlet, to me, is about the questions, not the answers, so in this play, what I am serving up is the mystery.”

To give a sense of the impact of the play, after opening night local performance artist and former NEA auditor Eliot Fintushel (auditors visit grant applicants across the country reporting on theater company quality for the National Endowment for the Arts) wrote: “Brent Lindsay does Hamlet as if it had never been done before, as if the audience were imagining it with him for the first time.”

The best way to describe Hamlet: Ghost Machine is to start where the piece begins. Hamlet is poisoned, he’s mortally wounded, and, in the last moments of his life, he attempts to make peace with all of his ghosts.

“He exorcises all of those ghosts,” says Lindsay, “by playing out his life for them. He plays out his life in the form of theater, which we know he loves so well.” The astonishing thing about the piece is that Lindsay, with director Amy Pinto, has reworked and reoriented the original script without adding a single new word. “It’s all Shakespeare’s text,” he says. “I just reconstruct it. I had to pull apart some of the meter in order to make sense of some of it, but that’s as radical as I get in making changes to the text. Everything is taken directly from the play.”

This is taking the concept of the play-within-the-play to a whole new level. One has to wonder, in focusing on Hamlet’s dying thoughts as he slips in and out of consciousness, does Lindsay’s Hamlet regret any of his choices—or his avoidance of choices?

“It is undeniable that Hamlet is one of the privileged class, but he is also an exceptional human being,” Lindsay says. “As an actor, I really enjoy truth . . . the truth in all of us, the dark and the light, the positive and the negative. The way I approach playing Hamlet in this piece is the same way I would approach Richard III or Iago or any of the other so-called villains.

“I’d get nowhere as an actor if I played them as bad,” he continues. “The whole point of theater is to open your heart to the heart of the character, and hopefully to leave a changed person, both the audience and the actor. In playing Hamlet, yes, I recognize his many weaknesses, but I have to focus on his strengths, I have to focus on what he has to reach in order to gain that final peace for himself. For me, Hamlet is the hero of consciousness.”

The hero of consciousness?

“Here is a guy who never lets go of the questions,” Lindsay explains. “What are we here for? Who do we put in power? Am I going to let it happen? What am I willing to give to this world, to what I think is right? Hamlet stands at the balancing point between consciousness and change. In terms of physical action, he may be wanting, but in terms of his intellectual willingness to grapple with the meanings of life, Hamlet is a hero.

“Is he sorry for the things he did, or didn’t do?” Lindsay asks rhetorically before giving a short chuckle. “I’m still figuring that out.”