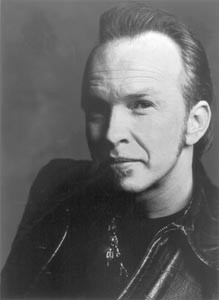 ALTHOUGH HE HAS no chart-topping CDs and doesn’t sell out arenas, Dave Alvin is responsible for some of the most enduring American music of the past 20 years. Fans of the roots-rock movement of the early ’80s recognize Alvin as the wild lead guitarist and songwriter for the Blasters, the legendary band from Southern California that continues to influence artists today like Big Sandy and His Fly-Rite Boys.

In the fertile L.A. music scene of that time, Alvin played a leading role. He helped Los Lobos secure their early Hollywood gigs; he played with X after leaving the Blasters. Along with Los Lobos’ David Hildago, Alvin wrote some of the most enduring music of that time. His songs are featured in the films Bull Durham and From Dusk ’til Dawn, and one of his songs, “Border Radio,” inspired the Allison Anders film of the same name.

In 1987, Alvin went solo. While his late ’80s works revealed his discomfort as a lead singer, it was also marked by a growing maturity in his songwriting. This artistic growth reached a new level with 1994’s King of California (Hightone), an exceptional work that helped build a new musical format, Americana, which eschews contemporary commercial styles and incorporates different modes of American sounds. Alvin’s distinctive blending of blues, folk, and rock places him with Lucinda Williams and Steve Earle as the leading proponents of roots-revival music.

Alvin’s latest release, Blackjack David, continues in the tradition of King of California. Its songs tell a story of love, death, and isolation. The themes are often bleak, revealing the blue-collar underbelly of the American dream. A lifelong Angeleno, Alvin writes of a desperate, tarnished Golden State full of dank bars and broken hearts. He’s been called the poet of the lonely highway, and although they sell in the thousands instead of millions, the past two albums are American classics that will be referred to for generations.

Alvin is also noted for his poetry, which he’s been writing longer than he has been playing music. A compilation of his poetry, Any Rough Times Are Now behind You, shows a definite Bukowski influence and the emotional depth that drives his music.

A contemporary troubadour, Alvin tours seven to eight months a year–sometimes solo, sometimes with a band. I caught up with him at home during a rare three-day break from performing.

Vasich: Although your songs are very personal, I don’t get a sense that they’re autobiographical. You seem to take archetypal themes of folk, country, and blues music and give it a different look.

Alvin: That’s true, but there are also biographical things lying around in there. I wouldn’t say I’m a highly confessional songwriter. But it’s there. In my song “From a Kitchen Table,” if you’re going to write a song about a man who’s living at home with his mom, which is based on a guy I know in Downey [Calif., his hometown], you have to you use your experience and regrets to make it personal.

Vasich: What is the source of your songwriting inspiration?

Alvin: I really don’t know, and I don’t mean to be vague about it. I just get an idea and try it out. And if it works, it works. In a way, talking about songwriting is a little bit like those people who say, “Don’t take a picture of me, you’ll steal my soul.” I don’t like to talk too much about where my inspiration is, because if I talk too much about it, it might go away.

Vasich: How do you address writing music vs. writing poetry?

Alvin: I try to keep them separate. The lyrics for the music gotta rhyme, for one thing. And the older I get, I feel totally uncomfortable doing poetry readings. I really don’t like doing them anymore. I still enjoy writing the poetry, but reading it is not fun. Still, you can take an image in your brain and write it both as a poem and as a song.

Vasich: How has your outlook on music changed since your Blasters days?

Alvin: I still listen to the same stuff that I listened to as a kid. The nuts and bolts are still Lightning Hopkins, Hank Williams, or Big Joe Turner. What’s changed is that I’m now able to use an entire palate [of musical styles]. In the Blasters, we could mix up a lot stuff–we were basically a blues, R&B band–and we mixed in elements of hillbilly music and Cajun stuff. But now I can do blues songs, like I do on the new album, but it comes from a different perspective. And then there’s stuff that sounds like the Carter family, stuff that’s pretty hillbillyish. As a solo writer, I can avail myself to all those styles–hillbilly or Chicago blues, whatever.

Vasich: I’ve noticed on NPR and college stations that artists like you, Lucinda Williams, and Steve Earle are getting more play. Have these become good times for artists such as yourself, who really don’t fit into commercial radio formats?

Alvin: Part of it has to do with that those people you mentioned, and lots of others have been making good records. When we started the Blasters, we knew there were people out there that liked this kind of music; it’s how you access them that counts. There’s a lot of different ways to access them now, between radio and the Internet. I mean, the Internet’s made a major change, just because it’s an alternative way–people go to a show in St. Louis and post a review of it themselves. And some guy in Pittsburgh reads it and comes to your show that night. Little things like that, they all help create a groundswell.

Vasich: Have you a grand design for your career?