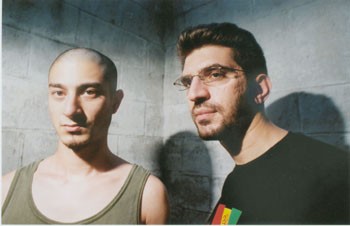 ‘Dark Side of the Moon’

‘Dark Side of the Moon’ is being reissued in a surround-sound SACD version.

‘Dub Side of the Moon’ is the Easy Star All Stars’ reggae version of Pink Floyd’s most famous album.

Cue up ‘Dark Side of the Moon’ to the ‘Wizard of Oz’ DVD.

As a junior high school student, Lem Oppenheimer started each day for six months listening to side two of Dark Side of the Moon, Pink Floyd’s classic 1973 concept album. “Like millions of people, I have strong connections to Dark Side,” he recalls. Now vice president of the New York-based Easy Star Records, Oppenheimer last week realized a longtime dream of releasing a reggae version of the Pink Floyd masterpiece, which arrives in conjunction with the 30th anniversary of Dark Side of the Moon.

Three years in the making, Dub Side of the Moon features such reggae and soul music stalwarts as Corey Harris, Frankie Paul, the Meditations, Sluggy Ranks, Dr. Israel, Gary “Nesta” Pine, Ranking Joe, and others. It is a refreshing reinvention of the Pink Floyd masterpiece, replete with Nyabinghi drumming, reggae rhythms, and trip-hop sounds.

It also is but one new release that will commemorate what is arguably the greatest rock concept album of all time. Look for a string quartet tribute to Dark Side from violinist Eric Gorfain and the Section, and a much anticipated, multichannel surround-sound SACD version, both due next week.

Prior to the March 3, 1973, release of Dark Side of the Moon, Pink Floyd was regarded as a cult band in the United States, best known for such meandering psychedelia as “Interstellar Overdrive” and “Careful with that Axe, Eugene.” But propelled by the Top 40 single “Money” and the rise of album-oriented FM rock, Dark Side became the band’s first No. 1 hit.

The album remained on the Billboard charts for an unprecedented 741 weeks before finally exiting on July 23, 1988. It has sold more than 24 million copies worldwide, half of those in the United States alone.

That’s quite an achievement for an album that champions alienation, insanity, and paranoia.

Over the years, fans have speculated all sorts of things about the album. Some believe it is an underground soundtrack to The Wizard of Oz; played in tandem with the movie (sans volume), the coupling of film and CD elicit some trippy synchronicity. Most assume it is an homage to Syd Barrett, Pink Floyd’s brilliant and troubled founder, who was edged out of the band in 1968 after succumbing to drugs and mental illness.

“The songs are about being in a rock and roll band,” guitarist David Gilmour told Melody Maker magazine in a 1973 interview. “The heartbeat [that opens and closes the album] alludes to the human condition and sets the mood for the music, which describes the emotions experienced during a lifetime. Amidst the chaos, there is beauty and hope for mankind. The effects are purely to help listeners understand what the whole thing is about.”

Like many great works of art, Dark Side of the Moon (which carried the working title Eclipse) was a pastiche of ides. The piano piece that forms the basis of the song “Us and Them” was written by keyboardist Rick Wright and had its genesis in a pale country and western song intended for Michelangelo Antonioni’s 1970 experimental film Zabriskie Point.

The lyrics of “Breathe,” which decry industry’s abuse of the environment but are often interpreted as a paean to pot smoking, were first set to different music in bassist Roger Waters’ 1970 film score to the adaptation of Anthony Smith’s 1968 book The Body.

In his 1992 book Saucerful of Secrets: The Pink Floyd Odyssey, author Nicholas Schaffner points out that the song “Brain Damage” was an outtake from the earlier Meddle sessions. The song contained the pivotal line “And if the band you’re in starts playing different tunes / I’ll see you on the dark side of the moon,” which referred to Barrett and served as the creative jumping off point for the Dark Side project.

So it’s not surprising that the album has no narrative thread. Rather, it embraces a wide range of themes that include work, fame, the passage from adolescence to adulthood, and conflict. The band–with help from engineer Alan Parsons–brilliantly stitched these disparate themes together through special effects, sound montages, and unusual rock meters (“Money” is played in 7/8 time). Interspersed throughout are barely audible taped interviews with people encountered at the recording studio (including Abbey Road doorman Jerry Driscoll) offering spontaneous comments about madness, violence, and death.

Ultimately, it is the universality–and the band’s ability to weave those lofty themes into a simple everyday context–that has made the album an enduring work of art. “These universal matters suffer little in our musical translation,” reggae producer Oppenheimer notes. “Reggae has long tackled humanist themes, especially those that document human suffering and endless hope.”