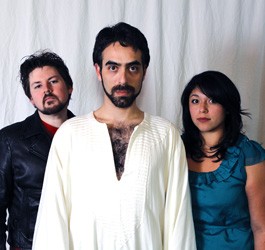 One would not suspect pop star Lady Gaga, street artist Banksy, transvestite comic Eddie Izzard and Jesus of Nazareth to have all that much in common. But according to John Shillington, director of Santa Rosa Junior College’s upcoming production of Jesus Christ Superstar, each icon has been inspirational in guiding the unique artistic direction of the theater department’s big spring show.

“We wanted a Superstar that was edgy, raw and a little disturbing,” says Shillington of the beloved 1971 rock opera by Andrew Lloyd Webber and Tim Rice. “So we’ve borrowed from Lady Gaga’s sense of fashion and Banksy’s sense of visual style, and in the scene where Jesus appears before King Herod—that’s where we conjure the over-the-top, cross-dressing aspects of Eddie Izzard.”

Another significant influence on this Superstar, which Shillington and a large cast of players have been rehearsing for months, is the 2002 revival staged in London and New York by visionary director Gail Edwards.

“Andrew Lloyd Webber said he’d waited 30 years for that production to come along,” Shillington notes. “He didn’t want just another ‘bell-bottomed revival’ of Jesus Christ Superstar. He loved that that production was so relevant to who today’s audiences are.

“So,” he laughs, “we’ve stolen everything we can from that production.”

Most notably, Shillington is letting the SRJC production be influenced by Edwards’ emphasis on strongly delineated characters; a clear picture of the emotional triangle between Jesus, Judas and Mary Magdalene; and a strong sense of visceral theatricality. The latter appears most vividly in the way both productions approach the scourging of Jesus late in the show. In earlier versions, Jesus’ whipping was pantomimed as Pontius Pilate counts out each of the 39 lashes. In this version, the scene is staged as both symbolic and, in its use of stage blood, unforgettably literal.

“We just have to figure out how to get all that blood onstage,” says Shillington, “and then clean the stage up again right away.”

Acknowledging that some faithful Christians still see Superstar as scandalous, Shillington suggests that great care has been taken to treat the play, and its description of Jesus’ last days on Earth, with respect.

“I know that this show has been described as controversial,” Shillington says, “but I think a lot of Christians who come to our version will find it very inspiring. I know I do.”