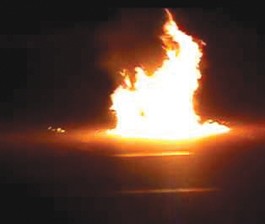 The England of my dreams has always been a sensible, mannerly sort of place, home to a stoutly resilient people. That fantasy held true in early August while my son and I walked peacefully along the Thames, visited castles, ate fish and chips and drank tea with the lovely British nationals we met.

But my final souvenir of England, however, is a wrinkled copy of the Guardian from Aug. 9 showing the front-page silhouette of a woman in midair, leaping from a second story window against a solid backdrop of bright orange flames. A firefighter stands below with his arms outstretched toward the woman. Both figures, caught forever in tableaux, were trapped in a nightmare created by BlackBerry-wielding youth organizers, whose texting helped whip up frenzy for violence and free merchandise.

The Guardian photograph was taken in Croydon, where my 10-year-old son and I had been invited—but declined—to visit on Aug. 8. We narrowly missed the smoky, violent night my Croydon-based friend later described as “pretty terrible.” The copycat crimes left shops and vehicles torched, killings by hit-and-run vehicles and a man found dead in a car with a bullet in his head. The list goes on.

“We want to show the police [and] rich people we can do what we want,” one female teenager told a British reporter. “It was good fun.” Was it fun to rob that injured boy and leave him bleeding, holding his empty backpack?

The London riots violated humanity. Violence breeds fear, which Winston Churchill knew to be the ultimate enemy, because it’s paralyzing. As the country continues sorting out what happened, I applaud the solid English citizens who rallied with brooms the next day, reclaiming their streets. Social sustainability demands psychological resilience in the face of horrors, and the stout refusal to let fear—life’s ultimate enemy—triumph.