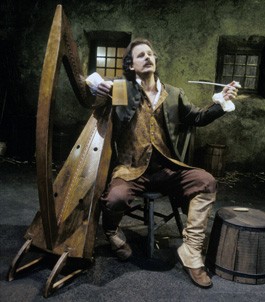 Patrick Ball once again inhabits the voice of Turlough O'Carolan

Sebastopol musician and actor Patrick Ball had one of his early successes with a recording of Celtic harp music by Ireland’s legendary 17th-century harpist Turlough O’Carolan. O’Carolan, a beloved storyteller, composer and world-class Irish carouser, is a character so vivid and colorful that Ball eventually began thinking about doing a show in which he would do more than just play the music of the O’Carolan—he would become him. With a script co-written with Peter Glazer, Ball has now performed the one-man play O’Carolan’s Farewell to Music hundreds of times, and twice in short runs at Spreckels Performing Arts Center in Rohnert Park.

The last time he brought the show to Spreckels was nearly 10 years ago, so fans of authentic Celtic music, and aficionados of classic Old World storytelling have been excited ever since it was announced that the celebrated solo show would have a full three-weekend run as part of the theater’s full-season series of one- and two-actor plays. Here Ball actually portrays two characters, O’Carolan as well as his longtime friend the poet Charles MacCabe, who recounts his early meeting with the famous musician, their growing friendship and the recurring conflicts between them regarding English rule of Ireland.

Ball’s renowned gift for storytelling is shoved up a few big notches when he merges it into the voice and dialect of the two characters, each of whom are pretty fair storytellers themselves. Word is that there is high demand for seats in Spreckels’ smallish Condiotti Experimental Theater, where all of the center’s theatrical shows will be staged this year. Folks who’ve seen the show several times plan to bring their children to be dazzled and entertained by O’Carolan’s unstoppable life-force and musical power—as well as by the effusive charm of Patrick Ball himself.